In order to finish the Dev Academy, I’ve had to develop an application as my practice assignment. I’ve been provided a mentor - Denzil Ferreira, whom I was guided by throughout the process. The purpose of practice assignment is to provide to freshly recruited junior developers a safe environment, in which they can work on a small feature of an application or simple application of their own. Moreover, thanks to mentor guidance development gets done carefully and is a great way to bootstrap as a new Software Designer.

On the initial project kick-off meeting, my mentor and I have decided that to mix things up a little. I should develop the app in a technology that I am not super familiar with. After going over several different possibilities, we settled with Kotlin Multiplatform Mobile (KMM). Some of the reasons behind the decision were: 1) my familiarity with Native Android Development and 2) KMM is an exciting and emerging technology worth exploring for a streamlined mobile development team.

Slicing apps into layers of concern

To create an applications with KMM is to develop one shared codebase for business logic and then separate codebases for each platform specific features. Separate native codebases are usually for user interface, and occasionally more depending on needing platform-specific functionality. This approach doesn’t reduce native performance as Kotlin is compiled to native execution code. KMM can save teams’ time and effort as you do not have to write redundant business logic in both apps, nor coordinate between teams for feature parity. We could consider a hybrid team, where we leverage each others’ experience effectively. 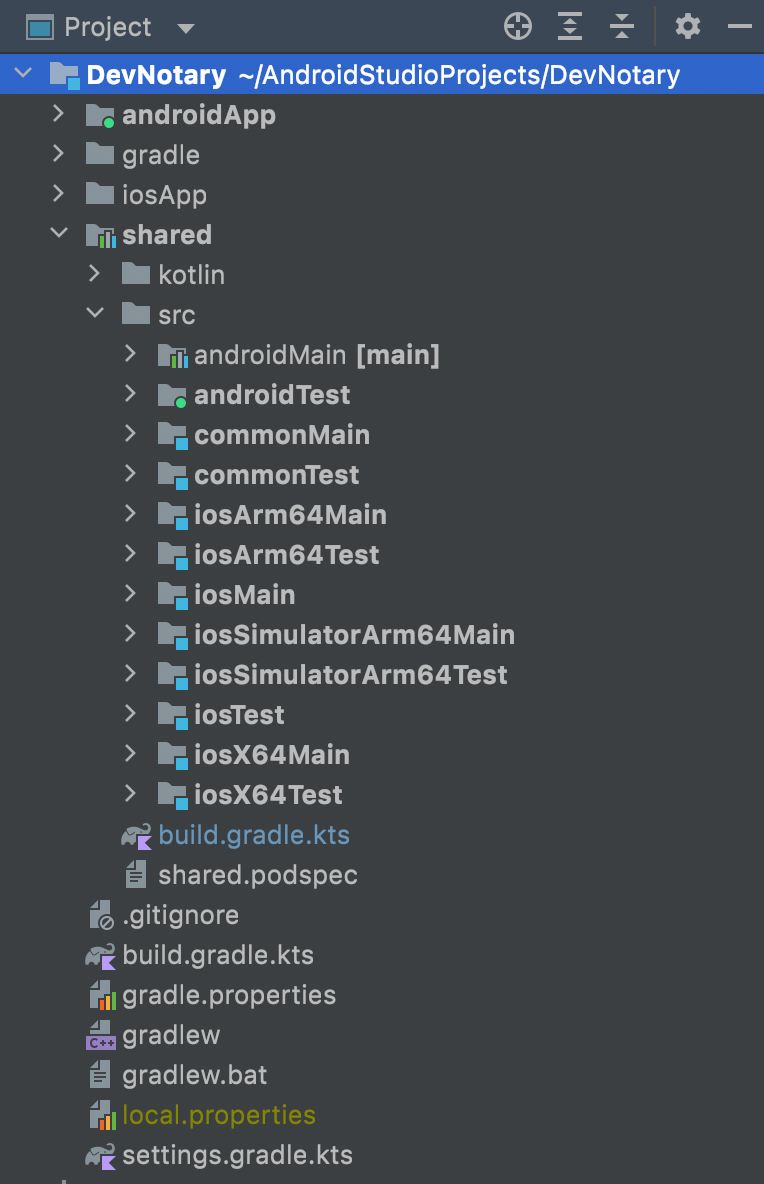 In shared module we create expect classes inside commonMain. Think of them as interfaces, without any implementation code, or a template of what should be converted to native code via KMM compilers:

And then in each platform module, we implement the actual class we created as expect:

Alright, so the project that gave me opportunity to test KMM in practice was Dev Notary. You can find the project pitch here. Dev Notary is a simple application that lets developers create notes, documentations or memos and interact with them. Basic CRUD with addition of sharing the notes with other users. The functional requirements were simple:

In order to accomplish this, I’ve decided to give myself a day to research other Kotlin Multiplatform Mobile projects, to learn from them, get some inspiration and only after that start planning my app. Thanks to that investigation, I’ve realized that I can actually share quite a lot of code between both platforms. After some planning it was decided that in order to test this untamed technology I should try to share as much code as I possibly can.

While looking for possible libraries that could make my expedition easier, I’ve found a library that implements Firebase SDK with pure Kotlin and therefore, enables usage of Firebase directly from the shared module! As for local database, I’ve decided to use safest option SQLDelight and for key value pairs multiplatform settings. Additionally, I’ve picked Kodein DI for dependency injection, Multiplatform UUID for Universal Unique IDs. OK… but, how to keep all this code separated and neat so that it’s easily testable and the presentation layers are not actually dependent on any shared module code? With a MVVM and clean architecture! 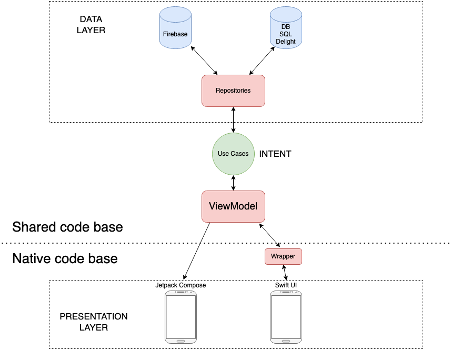 I could have shown here the actual code snippets from my application so that You could see how KMM actually gets done but by doing this, this post would become extremely long and probably dull for most readers. Instead, I’ll present some animated parts of the application, to show how it all works and I’ll link the repository so whoever’s curious can look into the code.

I recommend having a look at implementation of shared module iOS package and Android package to get a grasp of expect/actual mechanism. In case of Dev Notary I have used it in order to implement iOS working ViewModel, timer and ISO8601 date formatting.

Since my expertise lays in Android, development was done Android first. At the very beginning there were some configuration issues caused by KMM, adding one library dependency resulted in breaking other dependencies, there were mysterious errors while building projects and whatnot. Despite those, development of shared codebase and Android application went relatively effectively. First big blocker was encountered after starting development of iOS application, since I had no knowledge of iOS development and KMM didn’t work exactly as I imagined it. I had to slightly adjust shared module while learning Swift, SwiftUI and iOS development in general. This slowed the process significantlly. However, I want to emphasize that development of Android application with KMM wasn’t any different than doing completely Native Android App, despite some bumps with configuration of course. What was great though was that in order to create iOS app, I only had to implement the UI. After implementing “AddNoteView” and “NotesListView” for iOS it just worked out of the box. It felt that it could be super effortless only if I would have experience of iOS development.