The DevDay of Solita - See the pictures!

On the 12th of November 2021, about 200 Solitans from the development unit gathered in Sappee, a ski resort located in Pälkäne, Finland. There wasn’t even snow at that time. What’s the story behind this yearly event called DevDay and why it’s so popular? 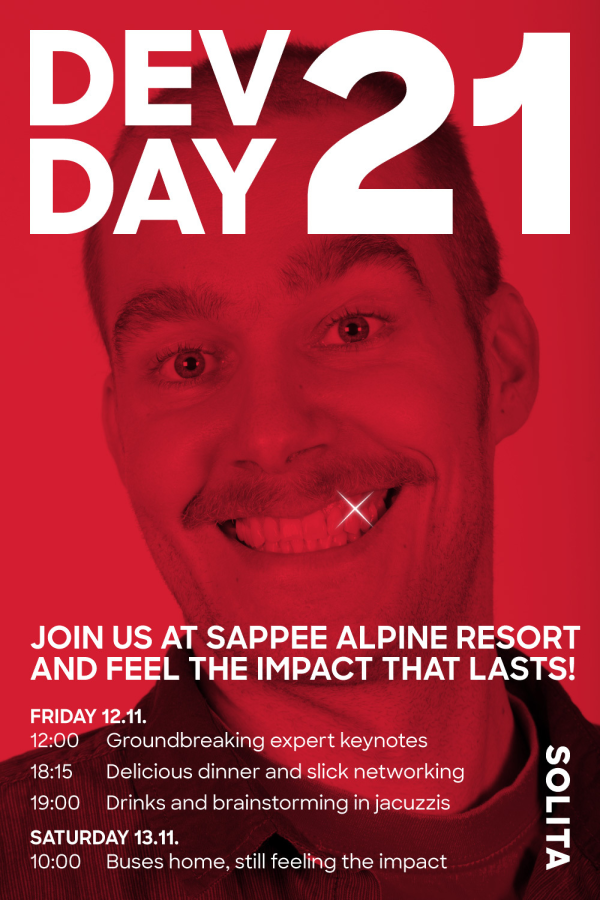 The first DevDay ever

The few dev teams of Solita in 2012 joined forces and decided to organize a recreational event together. However, already in the beginning, the event was not only about beer and sauna, even though, they were also included in the agenda. The event was designed from developer to developer, having deep professional content and also some fun together.

The first event was in Tampere, in Villa Härmälänranta, near the lake Pyhäjärvi. The first DevDay ever started with three speeches: the trends in the software business, the exceptional technology stack used in Lupapiste project, and last but not least, the basics of functional programming.

After the tech talks and well-deserved coffee break, it was time to do something together. There were different activities available, you could play ultimate, have a guided cycling tour around Pyhäjärvi (well, not around the whole lake, only about 30 km route), explore hiking gear, or play board games. During the evening there was food, sauna, and good company available. Some beverages too. 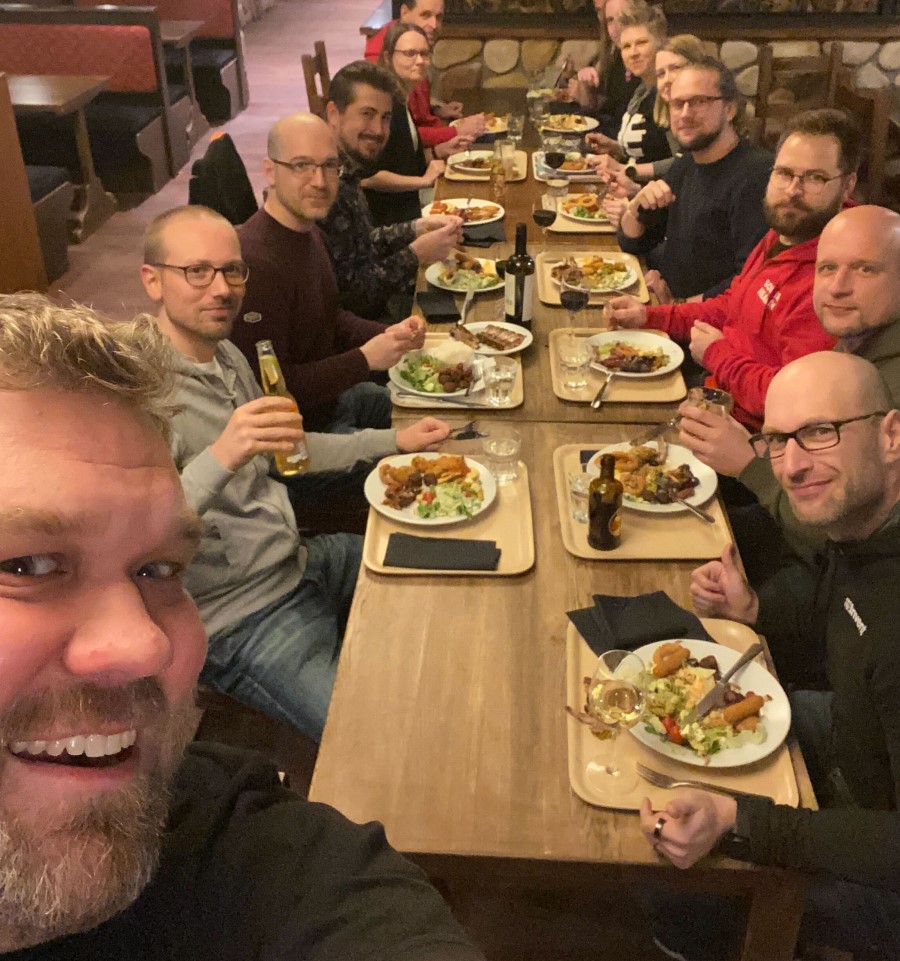 In the next year (2013) concept was iterated a little bit. This time the official part of the event, aka tech talks, was organized in the Helsinki office. Noticeable, there were two tracks of talks already, and you could choose from them.

After the official part, some of the people headed on a cruise to Tallinn, while others stayed in Helsinki dining, bowling, and having a good time before going home to sleep. The sailors returned next day, even though some fellows almost missed the ship in Tallinn.

That kind of DevDay was fun too, but it was not enough for the organizers. People were separated in the evening. A place where the people could spend time together and continue their discussions about monads, or whatever, even through the whole night would be needed.

In 2014 the DevDay was organized in Sappee first time. The main building provided big enough space for the talks and dinner, and people could stay overnight in cabins, have fun together in the biggest cabin, and enjoy the saunas and hot tubs in the darkening autumn night.

Since 2014 all the DevDays have been organized in Sappee, except in 2020 when the event was virtual because of the corona pandemic. The location of Sappee is quite good, so people can travel there from all of our offices, even from Oulu, even though the trip is quite long, especially the trip back.

The essentials of DevDays

The reason for DevDays being so awesome is a sum of many exceptional things, traditions and people. 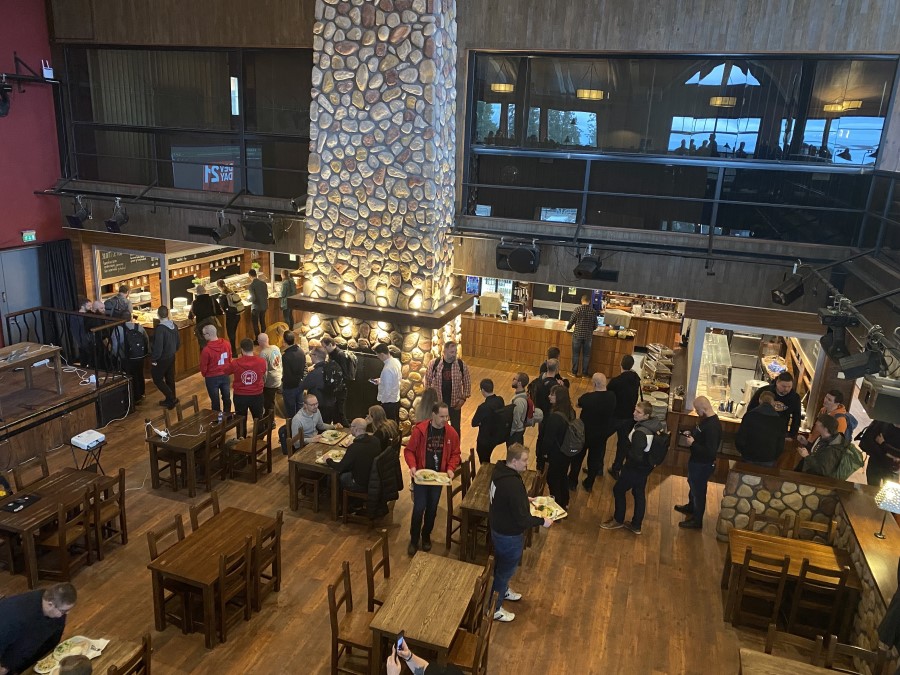 The DevDay21 starting with lunch

In the beginning, the DevDay was only for developers as it started as a joint recreational event for them. However, soon it was seen that the themes are important also, for example, project managers working in the same projects as the developers. Nowadays all the development unit is invited to DevDay. Also, some other roles, as recruiters, employee branding, and so on, working closely with developers, are invited.

Of course, as Solita grows, increases also the numer of participants in Sappee every year. This year we had about 200 people attending the day activities and dinner, and about 120 people stayed overnight.

Call for topics for DevDay starts already in advance. During that, you’re allowed to suggest your own topic or salt someone else to talk about some topic they are familiar with. Also, hands-on-sessions are allowed. After the topics are collected, there is a vote over the topics. Finally, the organizers have the not-so-easy task to sort the topics into different tracks.

The last couple of years there has been three different tracks. One of the tracks is more project-management-oriented to provide interesting content also to those who do not find the live-coding demos the most attractive.

The variation of topics is one of the best things in Sappee. This year we heard, among other things, enthusiastic speeches about marvellous hobby projects, deep dive into how to use penetration testing tools in projects, stories of new tech experiments, and reasoning about good practices in software development. 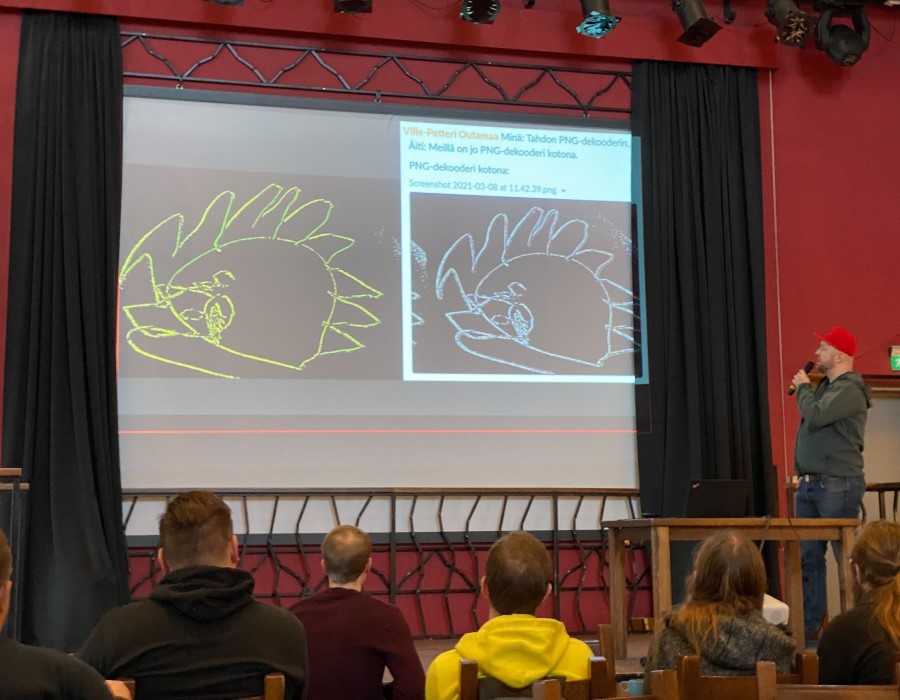 Ville telling how he made his very own PNG decoder

This year in Sappee we had 15 cabins reserved for us. One of the cabins is bigger and is thus called the party cabin. You can reserve your bed in any of those cabins, also from the party cabin, but then you should be prepared for the sleep not being in the highest priority.

In the evening after dinner, there usually happens something in the party cabin. The last couple of years there has been Scooter Power Hour organized by one of our lovable colleagues.

In the previous years there have also been amazing evening activities, for example, code recitation competition (reading code out loud like a poem), Mumps coding competition (the actual coding had been done beforehand, only demo part in Sappee), and outdoor games like flag robbing (lipunryöstö in Finnish). 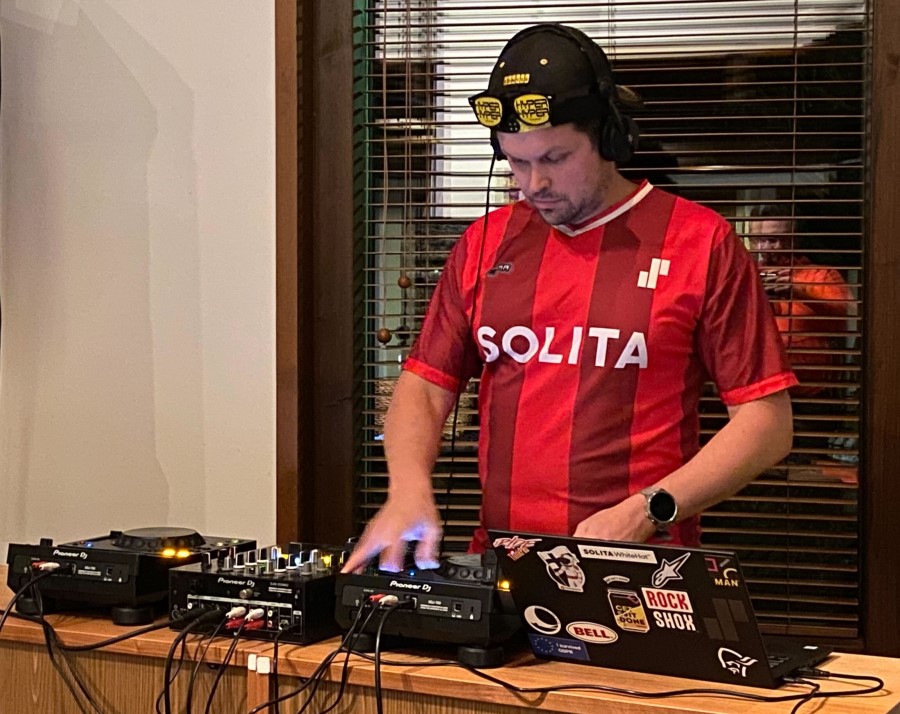 Bubbly in the women’s cabin

This year we had no less than three cabins for women. However, one of those cabins is the traditional women’s cabin in in front of the party cabin.

During the years, we have had the tradition to gather in that cabin after the official part and before the dinner and have a glass of bubbly. There are always new faces among us, so it’s good to meet each other and introduce ourselves, and reveal at least our name, office location, and role. Usually, the discussion won’t stop there and there is a cosy chatter until we need to go back to the main building for dinner. 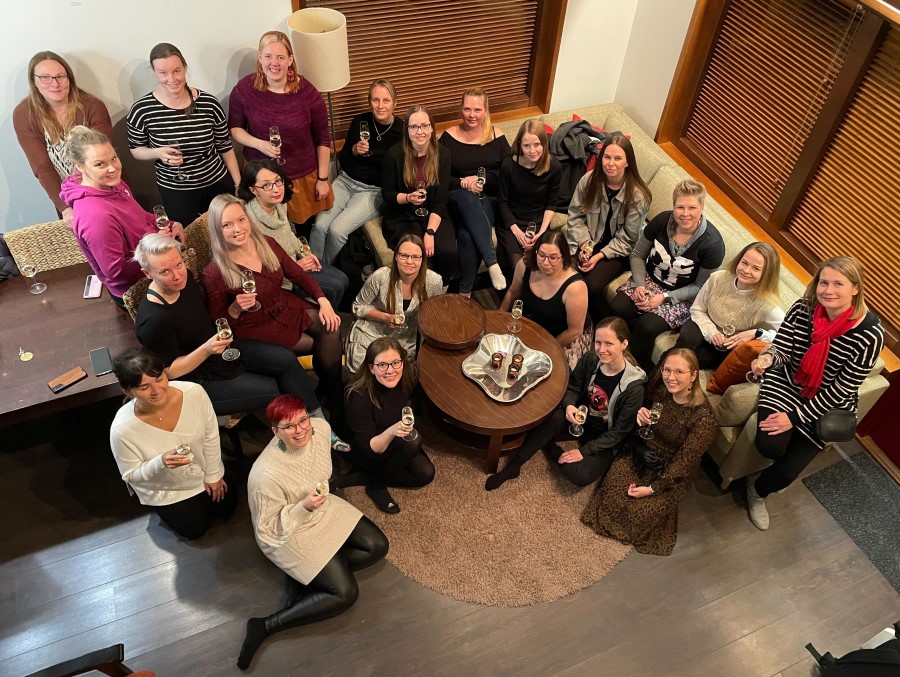 Aperitifs in the women’s cabin

There’s always an opportunity for karaoke in Waffle Cafe in Sappee. Some head there skipping the sauna and hot tub part and some join the karaoke only after a couple of hours of sauna and tub. Both practises work.

There are quite many hot tubs in use, but there are also many hot tub enjoyers on the move. Hot tub hopping is a quite popular activity in the evening, not to forget enjoying sauna once in a while. The hot tubs are outside and the autumn evening is cool. Hence, every year the point where the tubs start only to cool down is reached. After that, the hot tub hopping turns out to be a search for a tub with warm enough water (or a tub with enough water).

However, before the water is cooled down, it’s lovely to sit in a hot tub, warm water up to your neck, warm beanie on your head, and have a happy chatter with your colleagues.

Distributing awards to our people belong also in the official part of the day. This year people building the dev culture of Solita both internally and externally were awarded. For example, people being active in tech interviews, giving info sessions, giving a speech in meetups, attending employer branding, and last but not least, keeping up the atmosphere in our daily work. 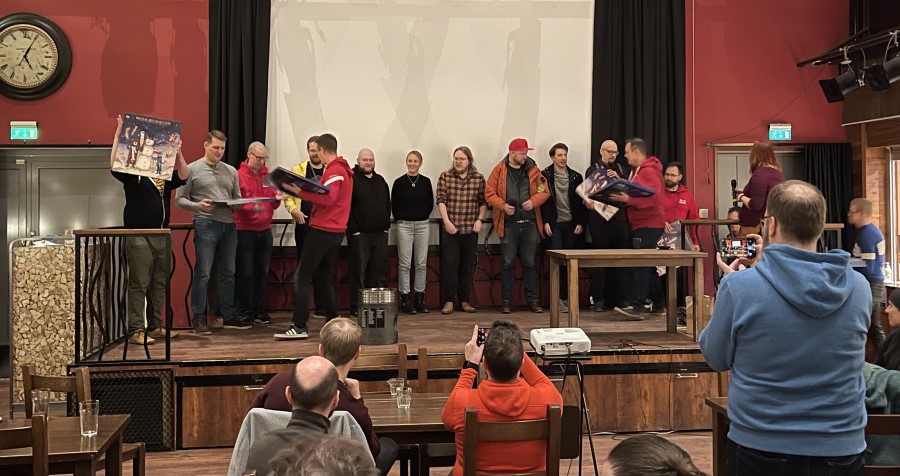 Finally, all the speakers are awarded, this year with chocolate calendars.

After a well-slept… um, slept, um… After the night there is breakfast available in the main building. After breakfast, busses come to take people from Sappee to Tampere, Helsinki, airport, or whatever. Anyhow, the journey to home has started after a great event. 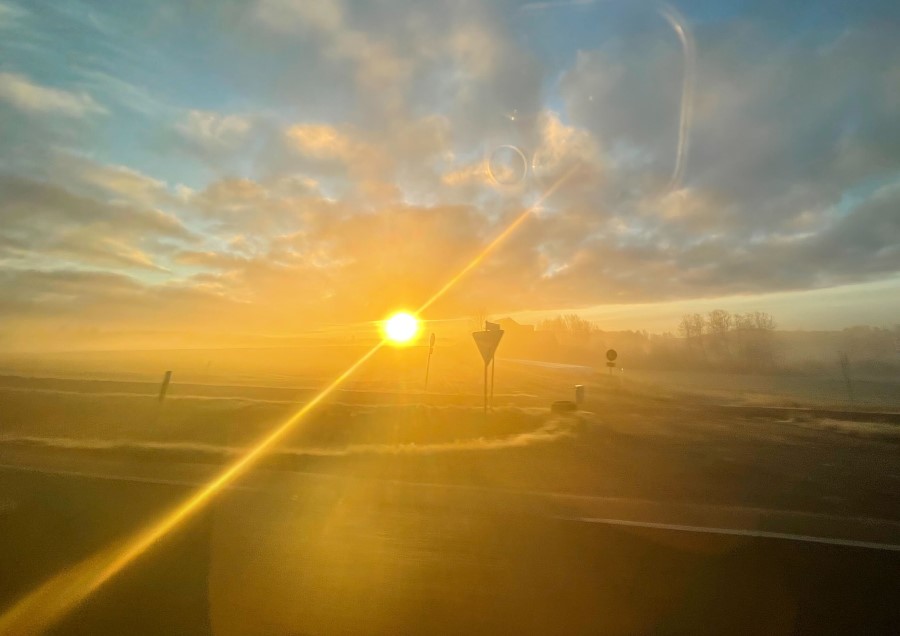 Finally, the organizers of the event. The organizing of the DevDay requires several people who dedicate time for this apart from the normal work. However, it’s a good opportunity to be building the Solita culture.

As the event has grown there are more and more details to be concerned with. However, year after year the organizers have managed to deal with everything and gather Solitans from different offices, and nowadays also from remote locations, to have a great DevDay together at Sappee.

In the next year, we will have ten years since the first DevDay. That sounds like a reason to have a decent party. Would you like to join too?