Upgrade Your Classic Pipelines to Pipeline as Code in Azure DevOps

Azure DevOps used to have only graphical build pipelines, known as Classic Pipeline GUI, which were edited only in the web portal. In Build 2019 Microsoft released pipeline as code, where pipelines are defined with YAML (aka YAML pipeline).

In this blog post, I will go through the basics of YAML pipelines and compare them with the classic pipelines.

Practically it includes most of the things a software team needs except infrastructure to where to run the software. Its strength is the smooth integration with all of these features. For example, we can access source code repo from build pipelines, and run build automatically when there is a new commit. Or we can mark tasks on the board as done when its code is deployed via release pipeline.

In this blog post, we will concentrate on pipelines; as code!

We will use a very simple “Hello API”. It will have one API method that will return a greeting like “Hello Lassi!”. Here is the C# code:

When we call GET https://localhost/api/hello?name=Lassi it will return “Hello Lassi!”.

It is easiest to begin if our code is in Azure (DevOps) repo, so I’ve put them there. When we navigate to the repo in a browser, we just need to push the “Set up build” button and choose our base configuration. We will choose “ASP.Net Core”. 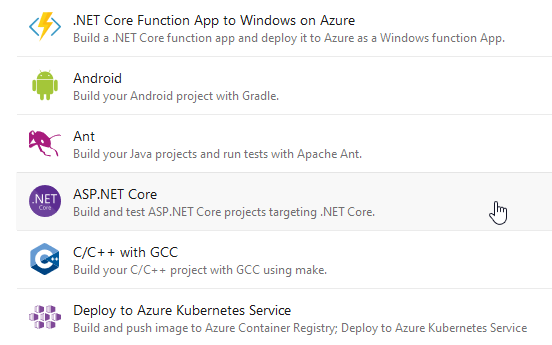 Now we have our initial YAML build pipeline (ie. pipeline as code) in front of us. 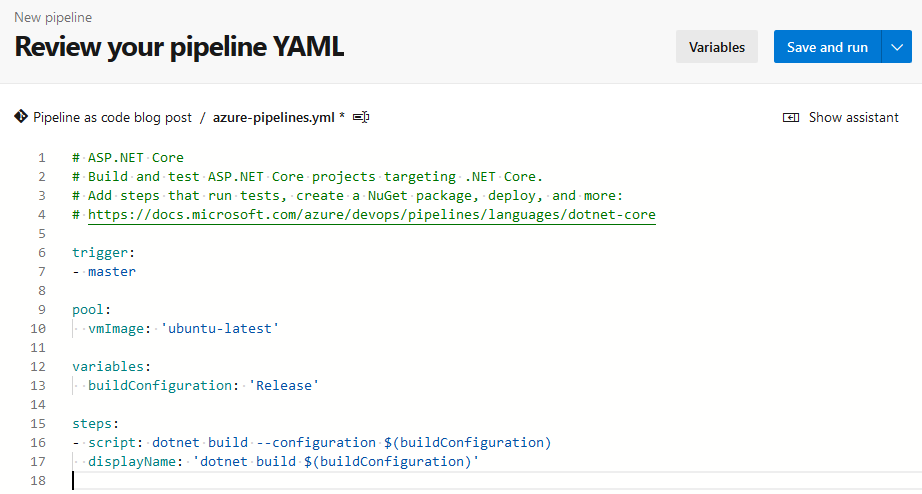 I will explain the key things in this initial pipeline.

Let’s push “Save and run” from the upper right corner and run our build for the very first time: 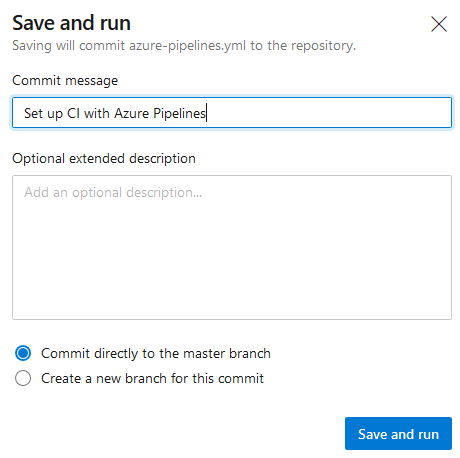 It will prompt us for a commit message because it is a YAML pipeline, and we have created a new file to be added to the repo. We will commit it to the master branch for simplicity. Here we are doing this in browser but naturally, we could use any text/code editor to edit our pipeline. Let’s run our very first build: 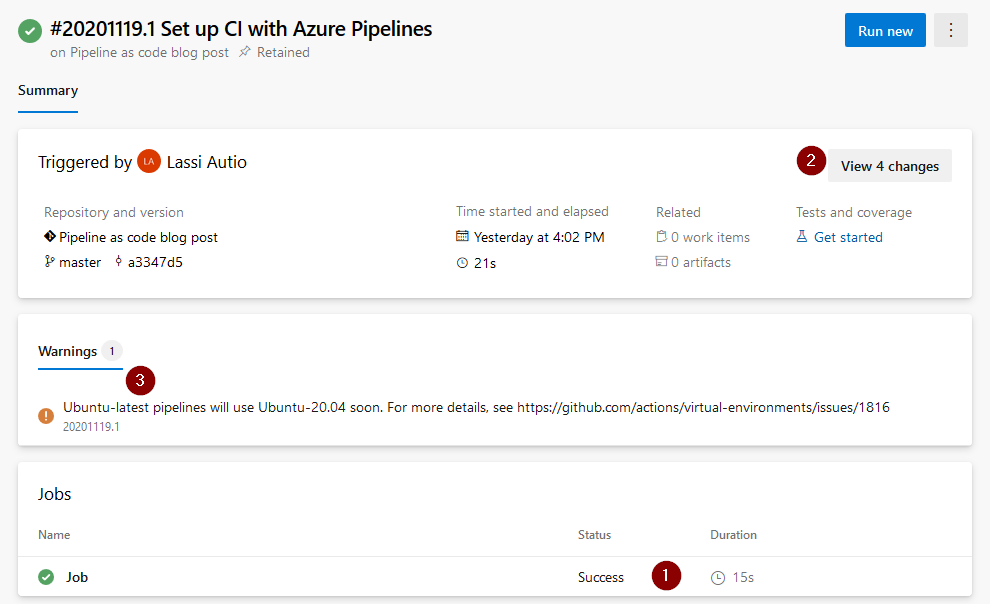 We can see that build was successful and took 15 seconds to run (1). If we want to, we can even see all commits that were run in this build before the previous build (2). There is one warning (3) that warns that even if now this was run with Ubuntu-18.04, in near future this will be run with newer Ubuntu-20.04. If this is important to us, we could change the pipeline code from “ubuntu-latest” to “ubuntu-18.04”.

Use the Azure DevOps Web Portal to Change the YAML Pipeline

You don’t have to remember the syntax of Azure pipelines because IntelliSense will help and there is also UI in the Azure DevOps web portal that will help us with the syntax. These will help you to switch from classic pipelines to YAML pipeline.

Next, we will improve our pipeline: run unit tests.

We have two MSTest unit tests in our code:

We will use the Azure DevOps web portal to add running unit tests into our YAML pipeline. When we go to edit the pipeline, we can see there are a lot of tasks on the right-hand side. We will choose the .NET Core.

This will show us a dialog from where we can choose the settings we want. This is a very nice feature because at least I can’t remember all settings for every task I’m using, nevertheless for the tasks I haven’t even used yet. 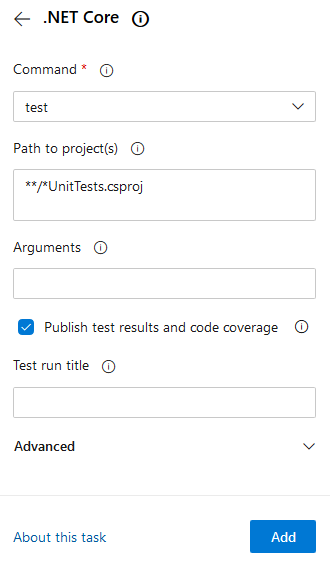 Here we have defined that we want to run tests from all *UnitTests.csproj files. When we click the Add button, the new task will be inserted into our code (lines 18-21). 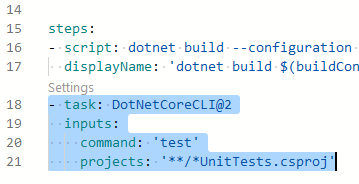 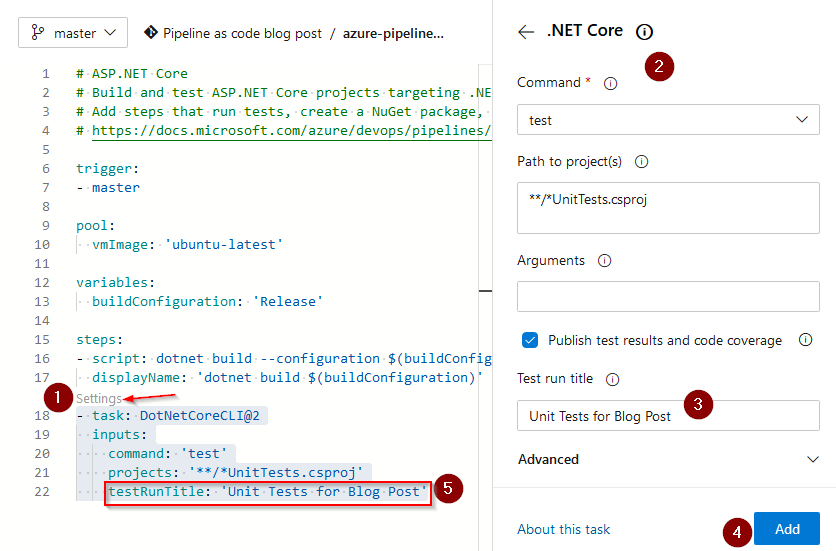 Now when we save changes and run the pipeline, we can see that there is a Tests tab and we can see from there that two tests have passed successfully. 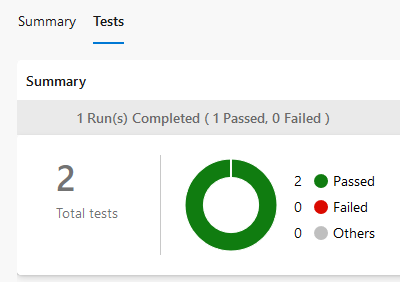 The web portal has also IntelliSense that helps if we make changes to the YAML pipeline directly. 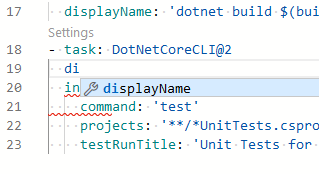 Use Visual Studio Code to Change the YAML Pipeline

Using the web portal is an easy but not so developer-like thing. Because the YAML pipeline is in a plain text file, it can be edited with any text/code editor. Fortunately, there is an extension for Visual Studio Code by Microsoft, which will help to edit YAML pipelines with it. 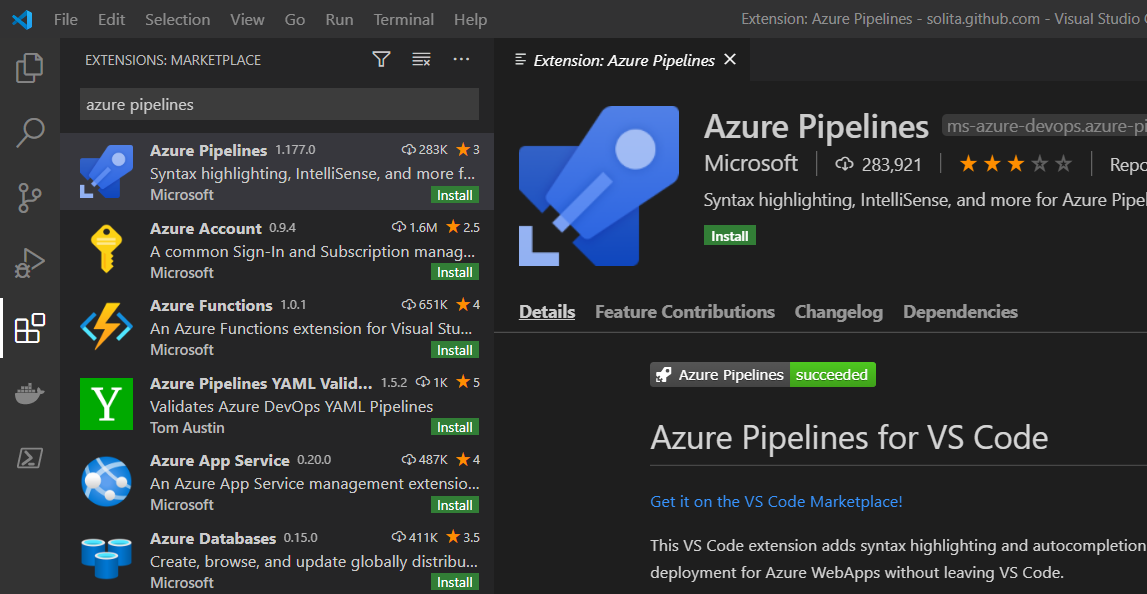 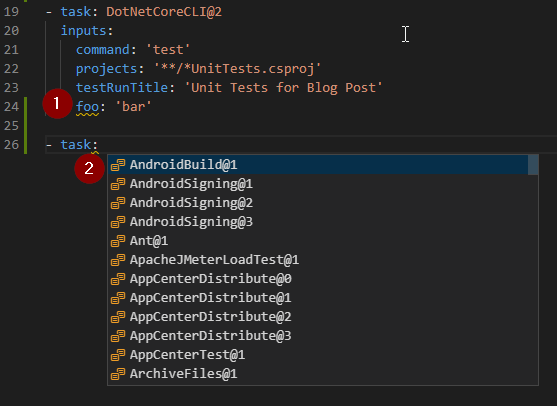 This is a really handy feature when converting pipelines or when learning YAML pipelines: we can get the YAML code from an old working classic pipeline with just two clicks.

Notice! All configurations aren’t in the converted YAML, and some parts have to be edited. For example, detailed pool information has to be changed to YAML.

Info: some changes and improvement is coming to “View YAML”: Replacing “View YAML”

For new pipelines, use YAML. For existing pipelines, keep classic (but consider converting to YAML).

The biggest pro for YAML pipelines is that they will be stored into version control. And thus important rule “keep everything in version control” can be achieved. That is a big lack of classic pipelines.

YAML pipelines support also better different versions of the pipeline. If we want to restore the older version of the code, the pipeline’s code will also be restored. But with classic pipelines, this doesn’t happen: we have to manually search for the version we need to restore. This is a big thing if the pipeline has changed significantly between versions.

There is one pro for the classic pipeline. As it is graphical, it is easier to understand especially if we don’t use Azure Pipelines so often. For the same reason, there is a lower learning curve with classic pipelines than with YAML pipelines.

At first, YAML pipelines look difficult compared to classic pipelines. Some of us might doubt if it is too difficult to start using YAML pipelines. Fortunately, there isn’t a need to know everything by heart. There is some graphical help in the Azure DevOps web portal and IntelliSense will also help with the web portal and Visual Studio Code. If you are in doubt about YAML pipelines, I recommend to give them a chance. They can be the next upgrade for your pipelines and efficiency.