Simulating a pandemic with Elixir

As I’m typing this, Finland has entered a state of emergency over COVID-19 and it is generally recommended to apply physical distancing for the time being. The drastic measures aim to flatten the exponential curve and thus the impact of the virus on Finland’s healthcare services. How much does this actually help? Let’s find out.

Elixir is a dynamic language designed with scalability in mind. Built around message passing and lightweight processes, building a simulator with nodes (= persons) communicating with each other sounds like a good opportunity to use Elixir.

Additionally, we want to visualize the social graphs between people. GraphViz, also known by its markup language dot, is a piece of software designed for drawing graphs. It scales nicely into reasonable graph sizes.

What is message passing?

A lot of Elixir is based on passing messages around. If you squint your eyes just right, it’s actually pretty close to calling methods in an object-oriented language.

A process is created here using the Agent abstraction, which is a wrapper around GenServer. GenServer is an abstraction for Erlang processes, while Agent provides a wrapper for managing its state. The process is initialized with a map containing a single key :infected. Agent.update/2 (that is, a function taking 2 arguments) is then used to update the state of the process, and Agent.get/2 is used to get the current state of the process. The & syntax is shorthand for lambdas, consider the Clojure equivalent #(assoc % :infected true).

Behind the scenes, Agent.update/2 sends a message to the process created by start_link. In the process itself, the process receives the message and handles the update to its state. In both update and get the caller waits until the operation is complete, and thus the functions are synchronous. 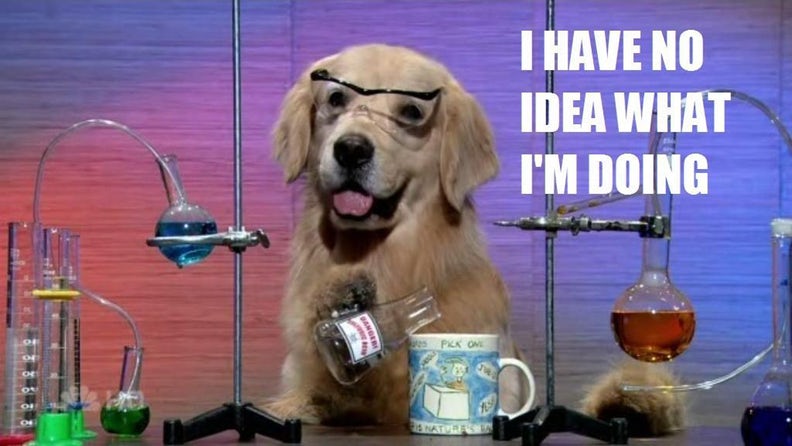 I’m not a virologist, statistician nor do I have anything to do with healthcare. None of the numbers or formulas are based on real-life data. That said, my computer science background has taught me to use the Stetson-Harrison method for approximating various results, so that’s what we’re using here. The end result looks nice, and that’s all that matters, right?

Nodes will be placed in a grid. On every simulation tick, each infected person has a chance to infect each connected cell based on node distance. Each infected person also has a small chance (0.001%) to die on each tick. If there are enough infected people at any given time (20% of the population) the chance of death grows tenfold.

How big graphs Elixir can handle without thinking too much about the implementation? I built a simple simulator that connects a bunch of nodes to each other, forming a weighted undirected graph with weights based on node distance. The weights are used for probabilities of the infection spreading. If infected, each node has a small chance to die on every tick. The probability of death increases if the network has too many simultaneously infected nodes. With 10000 persons, the simulator runs without any optimizations at roughly 1 second per tick. Since the simulator runs for roughly 50 ticks before nobody is infected anymore, this is fast enough. Note that the processes are not executed concurrently: the simulator sends each process a message and then waits for a reply from that process before sending a message to the next process.

So back onto the original question. How much can flattening the curve help? Let’s start with a baseline simulation: 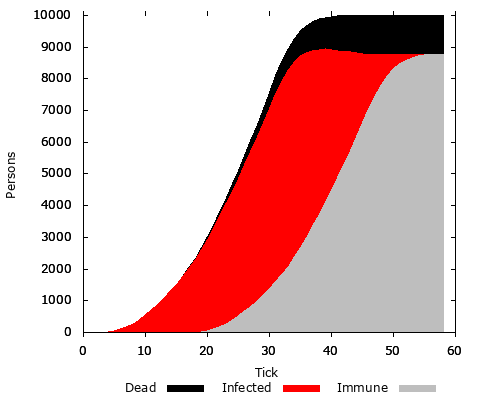 Roughly 1000 people died in about 40 ticks. What happens if we drop the infection rate to a tenth of the original by sticking home, washing hands et cetera? 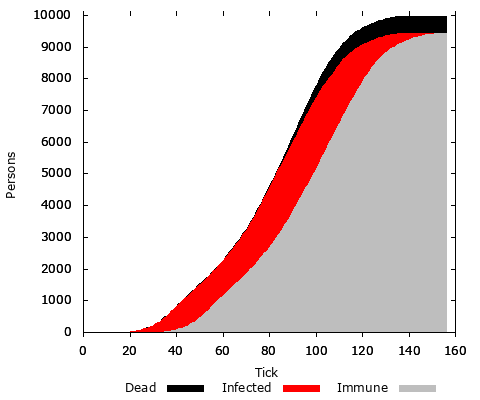 The death rate is roughly halved, which means about 500 additional people get to live another day.

Washing hands saves lives. Check out more tips on keeping yourself and others safe on the WHO web site.

Check out the code behind this blog post at GitHub.