Software development has many ways to battle against bugs. For example testing, code reviews and pair programming can help us to make better and safer programs. Fortunately we may also use code analyzers which automate the testing and vulnerability finding.

Clojure is not immune to bugs or vulnerabilities. Clojure being a dynamic language leads to situations where some problems may occur at runtime which in static languages are found out at compile time. The Clojure community has produced many useful tools such as linters and security scanners.

Eastwood is a linting tool for Clojure (no CLJS support) which detects many kinds of potentially problematic code.

For an example the following Clojure code contains a potential bug:

When running lein eastwood it produces next result:

Kibit is a static code analyzer which detects code that can be rewritten with a more idiomatic function or a macro. It supports also ClojureScript.

I think Kibit is good advice for beginning Clojure programmers but it contains some good advices for more experienced developers also.

Cloverage is a code coverage tool for Clojure which runs the tests of a program and calculates line and form coverage for namespaces.

Lein-nvd is a dependency-checker plugin whichs checks JARS in the program’s classpath with known vulnerabilites against the National Vulnerability Database.

Output of Lein-nvd gives status of the JARs with found vulnerabilities:

It should be noted that Lein-nvd does not tell exactly which direct or transitive dependency pulls a vulnerable JAR file. Most time JAR name matches a dependency. The full dependency tree can be inspected by running the lein deps :tree command.

Ancient-clj is a plugin to check your project for outdated dependencies and plugins and suggest updates.

Ancient can be started with command lein ancient upgrade :interactive which gives the option to decide one by one if the upgrade is made or not. The upgrade also runs tests and persists the changes only if the tests run correctly.

Ancient cannot analyze if the new version is backwards compatible or not. Many libraries uses semantic versioning major.minor.patch (1.2.3) where minor (1.2.3) and patch (1.1.2) version changes should be backwards compatible. Whether this is really the case can differ.

SonarQube is a code inspection tool which supports many currently used languages like Java, Python, C++ out the box . SonarQube server has a browser GUI for browsing the findings. 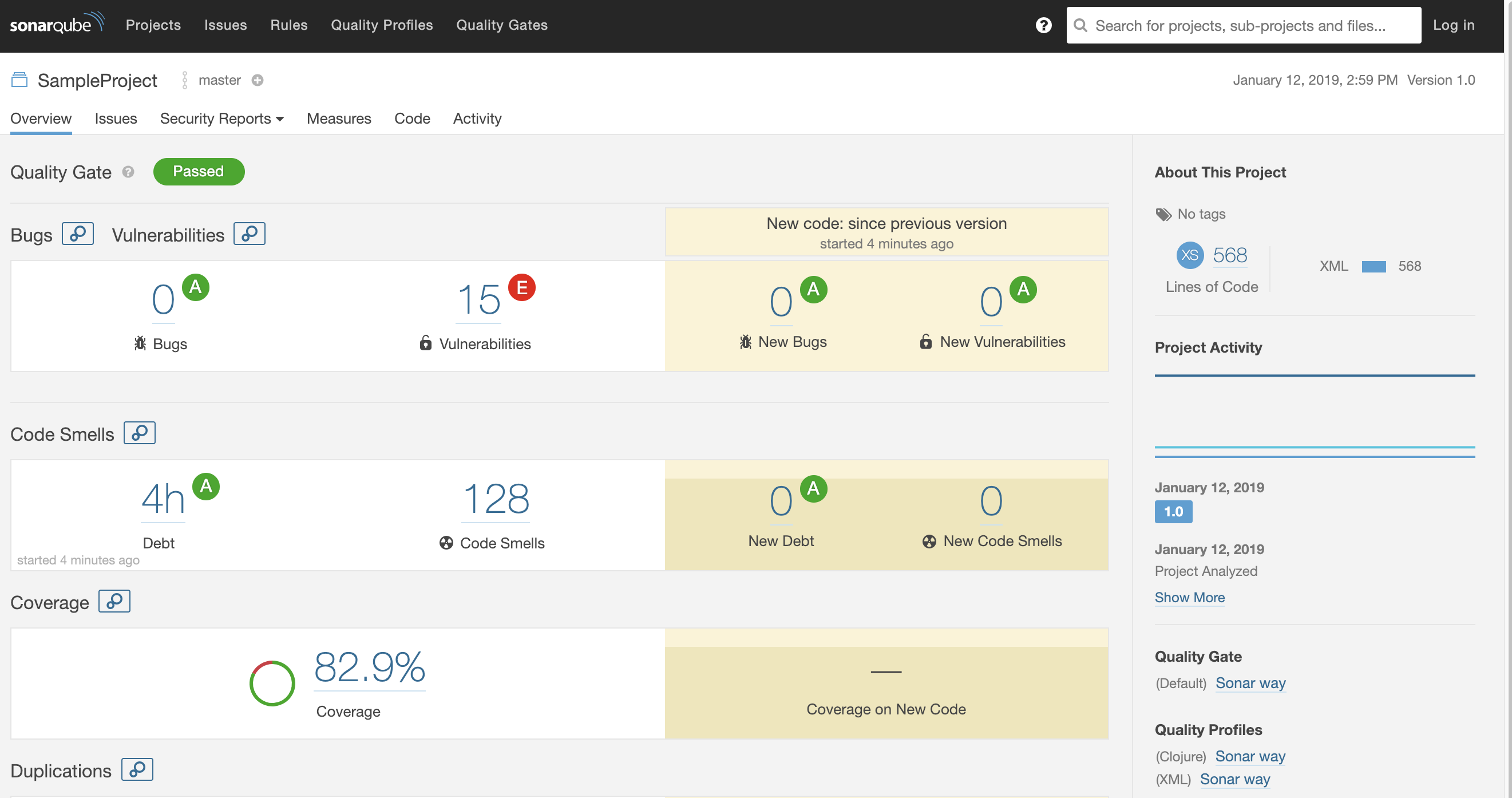 SonarQube unfortunately doesnt have out of the box support for Clojure. Fortunately SonarQube can be extended to support more languages with plugins.

There have been many different Clojure plugins for SonarQube but most of them have not been maintained and don’t work with newer versions of SonarQube. When I started to look for SonarQube plugin the only working one was plugin made by Felipe Santiago. The plugin only supported Eastwood based linting.

Because the plugin was open sourced and the maintainer was active I made the necessary changes to the plugin which added support for Kibit, Cloverage, Lein-nvd and Ancient which are now merged. The plugin has also a minimal SonarQube docker image file for testing the plugin locally.

Use an already existing application or clone a sample application with existing vulnerabilities and code smells git clone https://github.com/hjhamala/sonar-clojure-example.

Create a sonar-project.properties file in the root folder of your app:

Run sonar-scanner in the root folder of the project.

Open a web browser in http://localhost:9000/dashboard?id=your-project-key 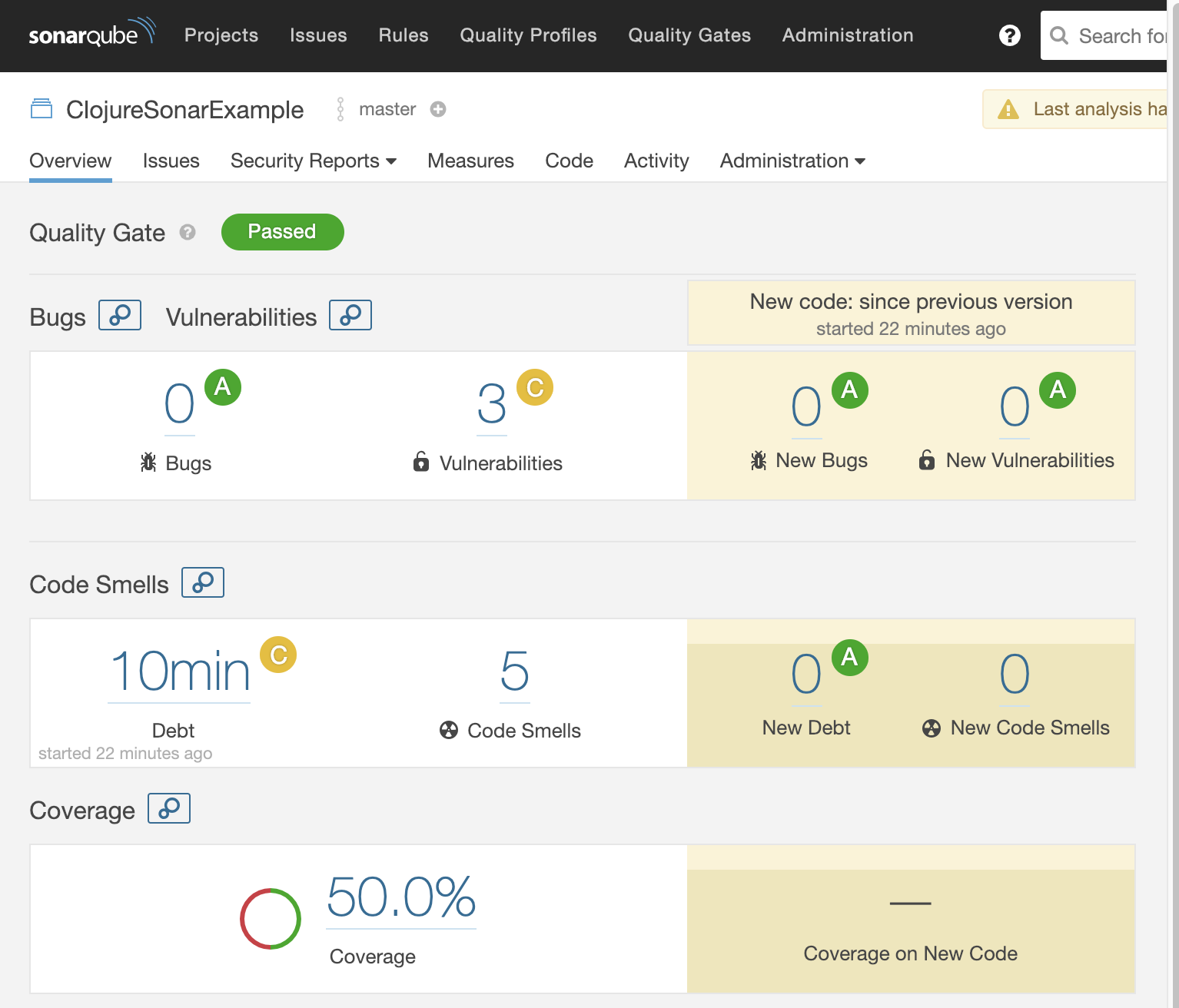 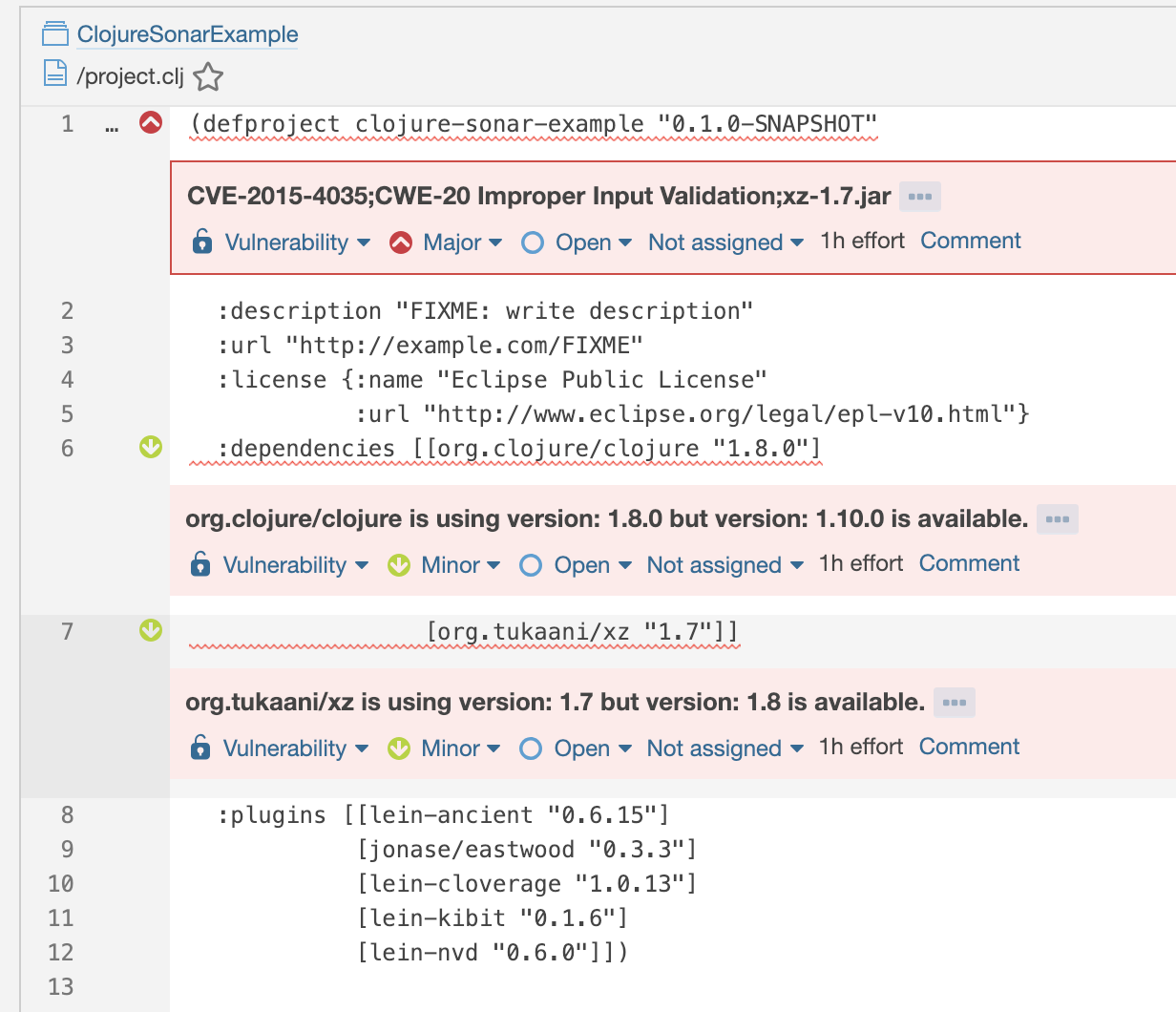 Core.clj has findings from Kibit, Eastwood and code coverage from Cloverage: 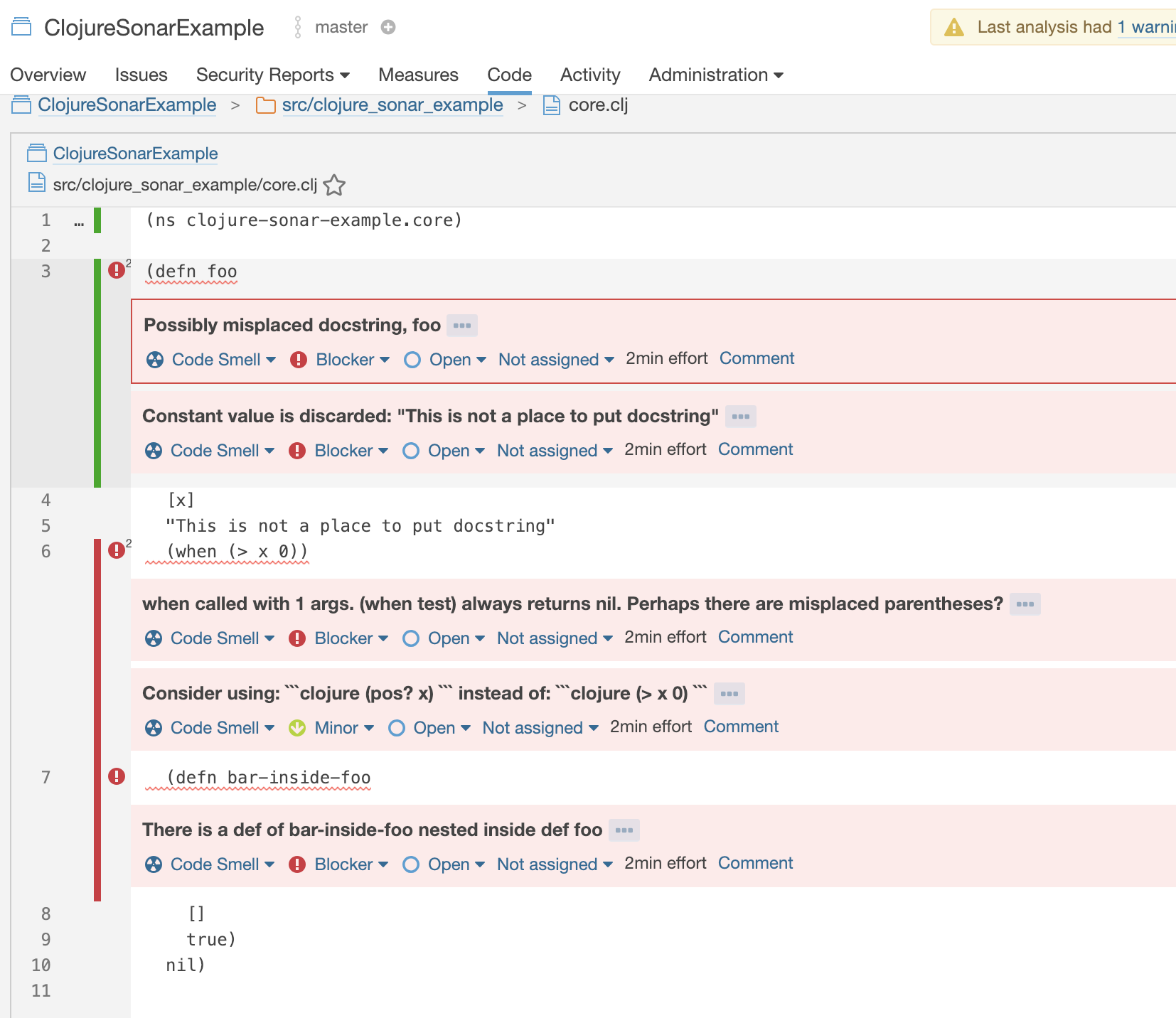 Limitations of the plugin

The SonarQube plugin currently marks all the found vulnerabilites to the first line of project.clj because the lein-nvd only returns JAR name not the dependency which pulls it directly or transitively.

Only line coverage is supported by SonarQube and the calculation seems to be somehow different compared to Cloverage itself by few percents.

Current version of the plugin is a native Java plugin which invokes Leiningen to analyze source code once per sensor. Running Leiningen takes few seconds per a sensor. Instead of invoking Leiningen we could make a native Clojure plugin which includes the analyzing libraries. This would make running the analyzers very much faster because multiple Leiningen invocations are not needed any more. Also the need to install Leiningen plugins with correct versions is no more needed.

Following improvements should also be considered as well: