Building a serverless radiator for fun and benefit with Clojure, Python and AWS

Several commercial products are available for monitoring development pipelines and deployments. What could be more fun than making your own?

Modern software development environment is most likely composed of multiple pipelines. There can be pipelines for build artifacts, infrastructure building etc. It is vital to notice build failures as soon as possible. Only monitoring the pipelines is not necessarily enough. Also, deployments«< should be monitored for noticing potential problems in performance etc.

In AWS, one project might have different accounts for development, testing/integration and production. This means that monitoring just one account is not even close enough. For example, in my current project at Solita, we have 3 different accounts which have 7 pipelines, over 60 CloudWatch alarms and some exposed metrics from deployments.

One good solution is to have a radiator which shows development status: 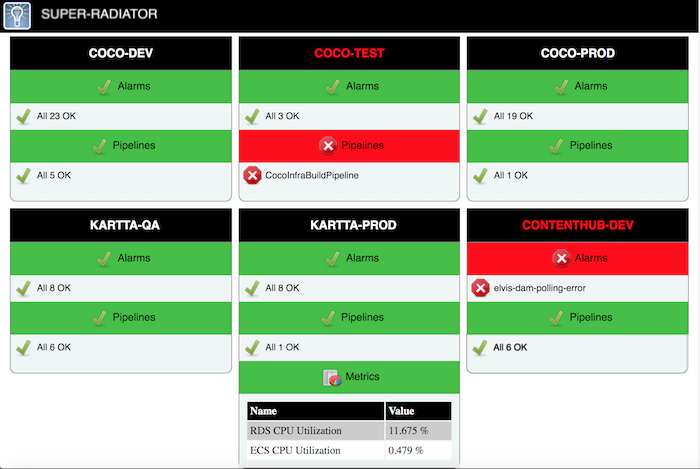 Because making your own is interesting and fun I chose to make my own radiator. For cost optimization I chose serverless approach with AWS Lambdas. Lets start our journey by seeing how to expose pipelines, alarms and metrics from AWS accounts.

First I created the Radiator Exposer software to help us monitor different AWS accounts. It supports AWS CodePipeline which is an AWS software product for building, testing and installing software to the AWS environment. CodePipeline integrates very nicely with AWS CloudFormation and is a pay-only-what-you-use product. There is no need to provision EC2 virtual machines for builds - AWS will provision them for you.

You can get statuses from CodePipeline by using AWS CLI or AWS SDK which is available for many different languages. AWS CloudWatch alarms and metrics are also accessible via CLI and SDK.

One way to extract data would be to make an AWS user to every account, generate an access key id and a secret key and poll endpoints directly from the radiator software. A variant of this would be to make a AWS role and configure cross-account permissions and then switch between roles.

Third way (which is what I chose) is to make a Lambda function which exposes statuses in one JSON data response. That way it is possible to get all necessary data from one endpoint. The endpoint should be protected with an API key which is supported quite nicely in the Amazon API Gateway. The radiator should poll the endpoints and generate a view of the account status.

First I started from what I want as a result. The result should be a JSON response with different keys for alarms, pipelines and metrics.

The main handler is therefore quite simple. There is no need to use any parameters because we return always all the pipelines and alarms.

Getting pipeline statuses and alarms is quite straightforward. The alarms can be fetched with one API call. Pipelines need to be fetched first and then current statuses can be checked one by one. For the radiator I also formatted the result a little bit.

Metrics cannot be fetched with one call because AWS has tons of different kind of metrics available. Currently I make a Python data structure which describes what kind of metric I want to expose. The next code example gets average RDS CPU utilization from the last 10 minutes.

Installing Radiator Exposer is easy with Serverless. Just run serverless deploy. Serverless runs for a while and returns a new endpoint and an API key necessary for authentication.

Radiator Exposer is a free software which can be downloaded from https://github.com/hjhamala/radiator-exposer.

Getting information from an account is not enough. There should be some fancy way to show it. You can also do this with Serverless.

For the radiator I chose to make a Clojure Lambda which polls endpoints and generates a plain old HTML response with automatic refresh. Because AWS Lambda supports Java is, it also supports Clojure. For generating the necessary Java classes I used the Lambada library. You should also be able to run the radiator locally, so I also wrote a simple web server for local use.

Generating HTML is easy with Clojure using Hiccup library. Hiccup syntax is also a very readable way to make HTML. The main function of the radiator is quite simple.

One limitation of the serverless approach is that all data for rendering the page should be returned in one response or be linked to outside resources. Lambda is not a web server so there is no way to serve static resources like CSS files. You could of course use S3 or another approach for static files.

Mix some styles and images

Instead of linking to CSS files I chose to embed necessary CSS in HTML response. For this I used the Garden library which makes CSS generation quite similar to using Hiccup.

The next code snippet shows part of the CSS for the radiator.

The Radiator needs of course some fancy images to show when something has gone wrong - alert icons etc. Because HTML images are simply links it is possible to link images from anywhere in Internet. GitHub version of the radiator have preconfigured links to Tango Desktop icons which work quite nicely. The images can be changed via configuration.

The configuration of the endpoints is done with a simple data structure.

The Radiator should of course also support another CI providers like GitLab. To make this easier I made a generic data structure for pipelines, alarms and metrics. The radiator should therefore first fetch data from endpoints, after that transform them into a generic format which is then rendered into a Radiator view.

The generic data structure is defined with Clojure Spec. For example:

Supporting GitLab is done simply by fetching pipeline data via REST API and after that transforming a pipeline status to generic format.

The radiator should show at a glance what is going on in the accounts. By default, there is no need to list different pipelines or alarms - only show the number of pipelines etc. so we can be sure that the exposer is working correctly. 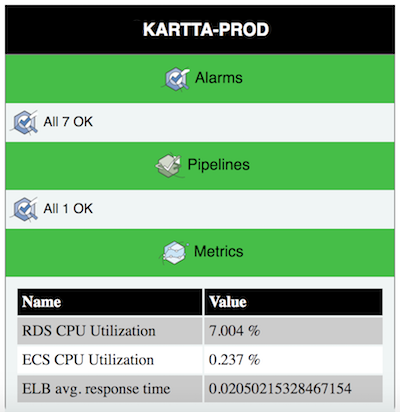 When the pipeline is running the account name is changed to yellow and the running pipeline is shown: 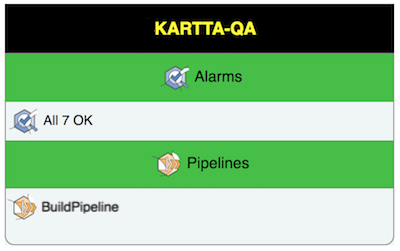 Unfortunately there are situations where all everything’s gone bad and it should be made clear by using red color:

The radiator is also installed by using the Serverless framework. The framework has support for Java but for easier deployment I made a Clojure serverless plugin for better Clojure support. Using the plugin the installation is done simply by running serverless deploy. The radiator endpoint should of course be protected. A token string can be set in the configuration file radiator.config.

Serverless radiator is usable now for my needs at Solita. It should be pretty straightforward to add support for different cloud providers like Azure or Google Cloud. Both of these should have alternatives for AWS Lambdas and a way to expose the necessary information.

The radiator is now done to support only fixed-sized displays. Maybe in the future I will make an responsive UI so the radiator can be easily shown in mobile devices. Instead of linking to external images one could simply embed necessary images as inline SVG elements.