Programming - but in Which Language?

Usually there is a debate over which programming language the project should use. Is Clojure better than Java? Should we use Python? Even JavaScript? This time we do not care what the programming language is, but what language is used to describe the domain. Should all the code be in English like addApplication, or should method names and variables be in Finnish like lisaaHakemus? This is a relevant question, when we, mostly Finnish speaking developers, build a software to a Finnish customer.

This is fine. We developers are used to reading and writing program code in English. If the code base, comments and even commit messages are totally in English it is even possible to have developers who do not speak Finnish in the team. That is very likely to happen even in the near future, because Solita is now recruiting also in Sweden. According to the comments from our developers, all code in English is the natural way to do it.

Using English as the domain language is a natural choice if the customer operates internationally or the domain is already in English. If the customer gives the domain vocabulary, it is easy to adopt in the project and the conversation of business logic is not distracted by misunderstood semantics because of language. 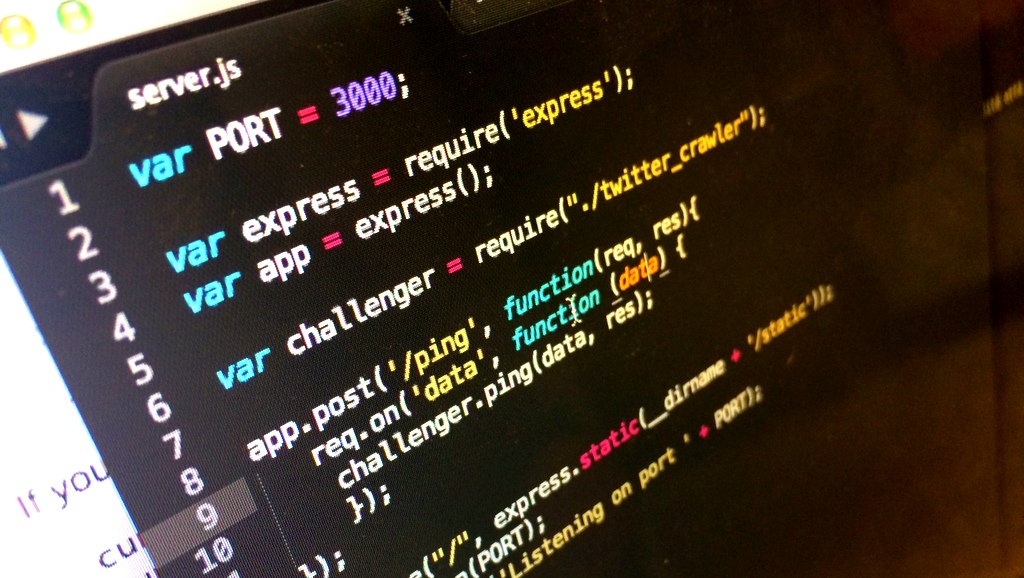 If the domain can easily be translated into English, it can be done. This should be done carefully, maybe in cooperation with the customer. The translation might require some expertise, because it makes difference if you translate Finnish asiantuntija literally as thingKnower instead of more sensible word expert. After the translation, the vocabulary should be documented. Without shared vocabulary the code will soon be full of experts, specialists and professionals when every developer is making own translations. The documentation also helps new developers entering the project.

If the domain is translated, the translation should be used in all layers. Keep your database, server, client and front consistent and use the same language and vocabulary in every level.

The Domain in Finnish

But. Let us think that the customer is a Finnish company operating only in national business with a complex domain. Maybe the domain is even regulated by legislation. All the domain concepts might not even have an exactly equivalent word in English. There is no point of just making words up; it just leads to misunderstandings. When the lack of exact vocabulary can be seen as a risk, it might be reasonable to keep Finnish as the domain language. Using the legit domain vocabulary throughout the database, software, and documentation guarantees also a common language for the developers and the customer.

Usually the decision of using the Finnish domain language is made with the customer. This, of course, makes it difficult to adapt developers who do not speak Finnish to the project. One can surely learn the domain names, and if the code, comments and commit messages are in English, it might be possible to enter the project. However, in the real life, the method names can be quite complicated and impossible to understand despite of the few English words in the middle, or what would you say about actual test method called kiinteistoWithEOWithVireillaolevaHaltijoidenSelvennysasiaHasOnlyVoimassaolevatHaltijat.

All Naming in Finnish

If we decide to keep the domain in Finnish why would not we use Finnish in every name of method, variable, package, class, etc. The Finnish domain vocabulary has already made it difficult to really adapt developers who do not speak Finnish to the project, so why not use Finnish whenever possible. Some developers rather use consistently Finnish in all naming than mix English and Finnish but there are also opposite opinions.

I made a simple poll to our developers to find out how the real project life in Solita looks like. I got 43 answers from different projects. The programming languages utilized in the projects varied; there were Java, Clojure, NodeJS, JavaScript, Python, C/C++ and C# projects.

It seems that the language decisions depend mainly on the domain of the project. According to the poll, the Finnish domain language is used for he most part in the projects where the customer belongs to the public administration of Finland (e.g. Finnish Transport Agency, Social Insurance Institution of Finland or National Land Survey of Finland). In some of these cases, the programming in Finnish is required by the customer.

In the cases where the chosen domain language is Finnish, it is more popular to write domain-specific code entirely in Finnish than to mix English and Finnish. However, there can be some exceptions, such as the names of non-domain-specific utility library functions and lower lever functions, which can use English, such as insertHakemusUsingJdbc. 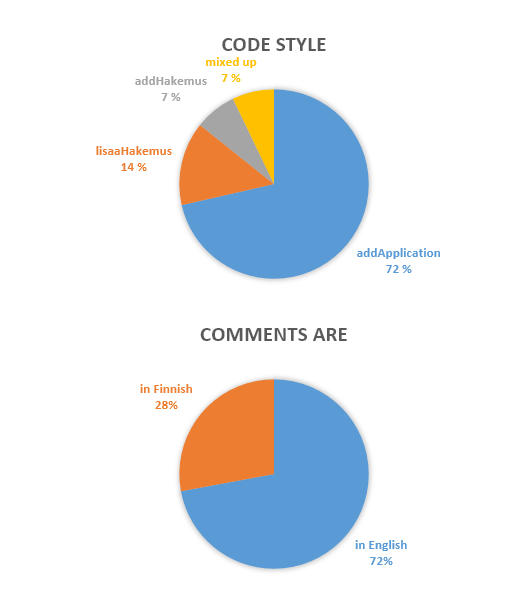 Mostly the developers coding in Finnish were satisfied with the chosen language. At the beginning coding in Finnish had been awkward but after a while it became really fluent. Some even say that it is much better than making up clumsy translations or mixing two languages.

The poll also revealed that some long-lasting projects have evolved to containing mixed practices. For example, the language has changed during the years, or the methods are named in several ways depending on the developer in question. 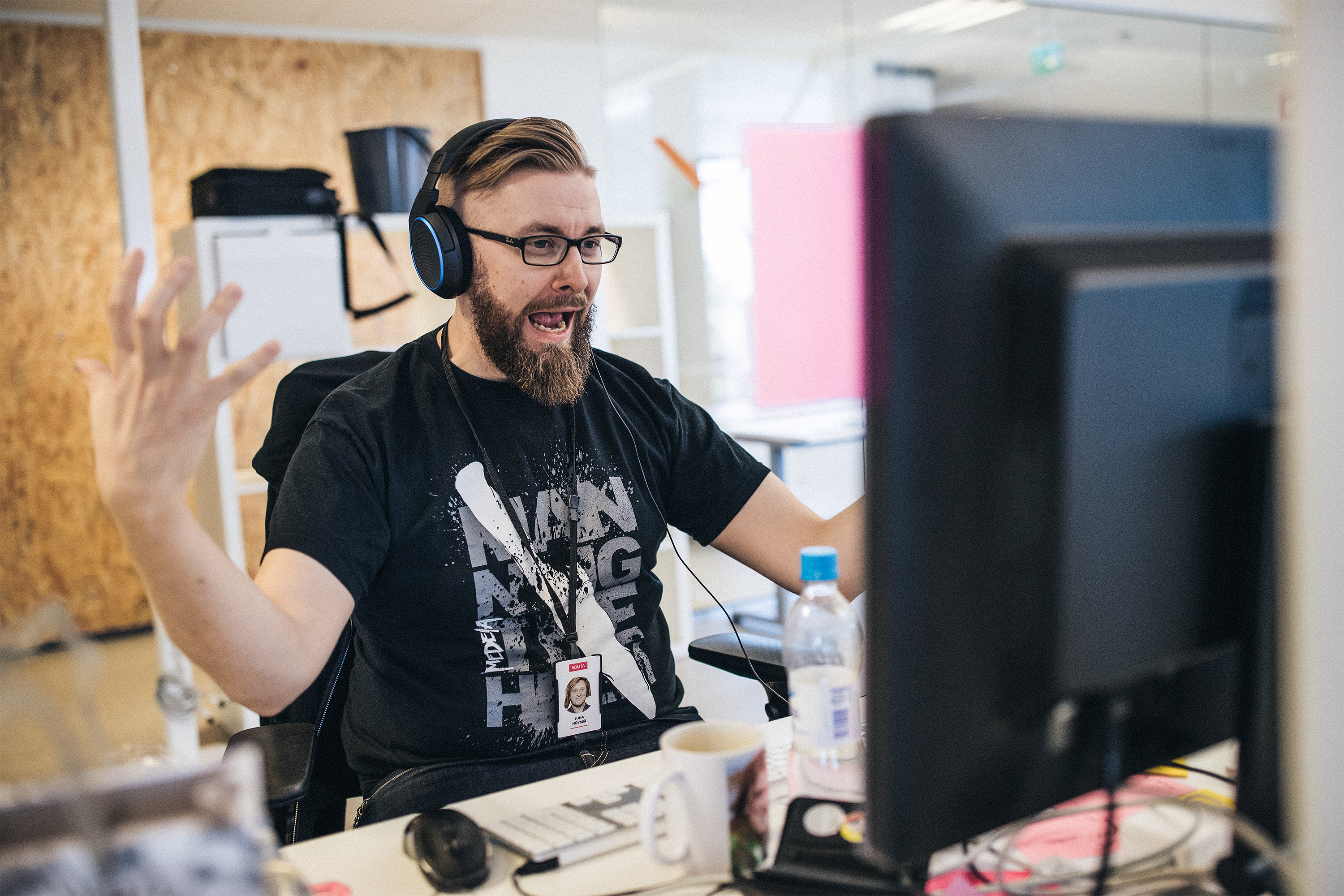 The domain language and the code style related are decicions that should be discussed carefully and made in the beginning of the project. The decicion (and possible translations) should be documented, maybe included in the development guide of that project, and also introduced to the new developers entering the project.

After all, the code can be written in English or in Finnish or systematically in both. The main thing in obtaining and maintaining clean code throughout the project is: whatever you decide, don’t change the decision in the middle of the project.