Solita started a Java Trainee recruitment program in November 2016. This is a story of how it all happened from one trainee’s perspective.

“What do you think about this?” One afternoon in mid October my wife handed over her tablet displaying a web page with a big pink banner. It was an advertisement for the Java Trainee recruitment program that Solita was starting. I read it through and thought, “Well, ok, it does sound interesting, but six months? I might be able to find a paying job quicker than that… I suppose I will have to think about it.”

I am a software designer by education, and that’s what I had done for the first ten years of my career, before moving my focus more towards software package integration and configuration for several years. Taking up on this program would mean another turnaround, but that’s what I had thought about doing, anyway.

Somehow neither one of us had seen the ad before, and the deadline for applications was looming. After thinking and talking it through and reading more about Solita and the program online, I decided to apply, and so around lunch time the next day I clicked the “Send” button. Literally less than ten minutes later I received a call from Saranen Consulting inviting me to a group interview at Solita in a couple of days time. “Well, that was fast,” I thought as I hung up.

I’d never been to a group interview before, so I was not quite sure what to expect. I imagine in a way it would be easier because you’re not facing the execution squad alone. On the other hand, it might be more stressful because of all the live peer comparison creeping in: “Oh shoot, they’re all more experienced/witty/beautiful than I am.” In the end it turned out to be a pretty relaxed occasion, and afterwards I thought it went pretty well.

My already positive impression about Solita had gained a boost at the group interview, and so, if I had not been a hundred per cent sure before, at this point I had to admit to myself that I did want to do this. I was anxiously awaiting a call and would have been very disappointed if this was as far as I was going to go. Well, the call finally came and next up was a personal interview at Saranen Consulting. That also included having to fill in Cut-e work personality, motivation, and ability tests online.

I never did get any results from those tests, but apparently I was deemed worthy, as the call to a personal interview at Solita soon followed. If the interview at Saranen had been more about my work personality and such, at Solita the focus was now more on my skills, work history, and technical background. Certainly one aspect of the interview was also about how compatible with the company culture (or how “Solitan”) I was.

The timetable for all three rounds of interviews was pretty tight, as the Java Trainee program was starting already in the beginning of November. So, I did not have to wait for very long to find out I was one of the ten trainees selected. Yay!

At the beginning of the first day the other trainees and I were welcomed to Solita with Starter packs containing all kinds of Solita goodies. We were given a refreshment presentation about the program in general and the agenda for the day as well as the coming weeks. A tour of the premises helped us to get our bearings in the Tampere office. 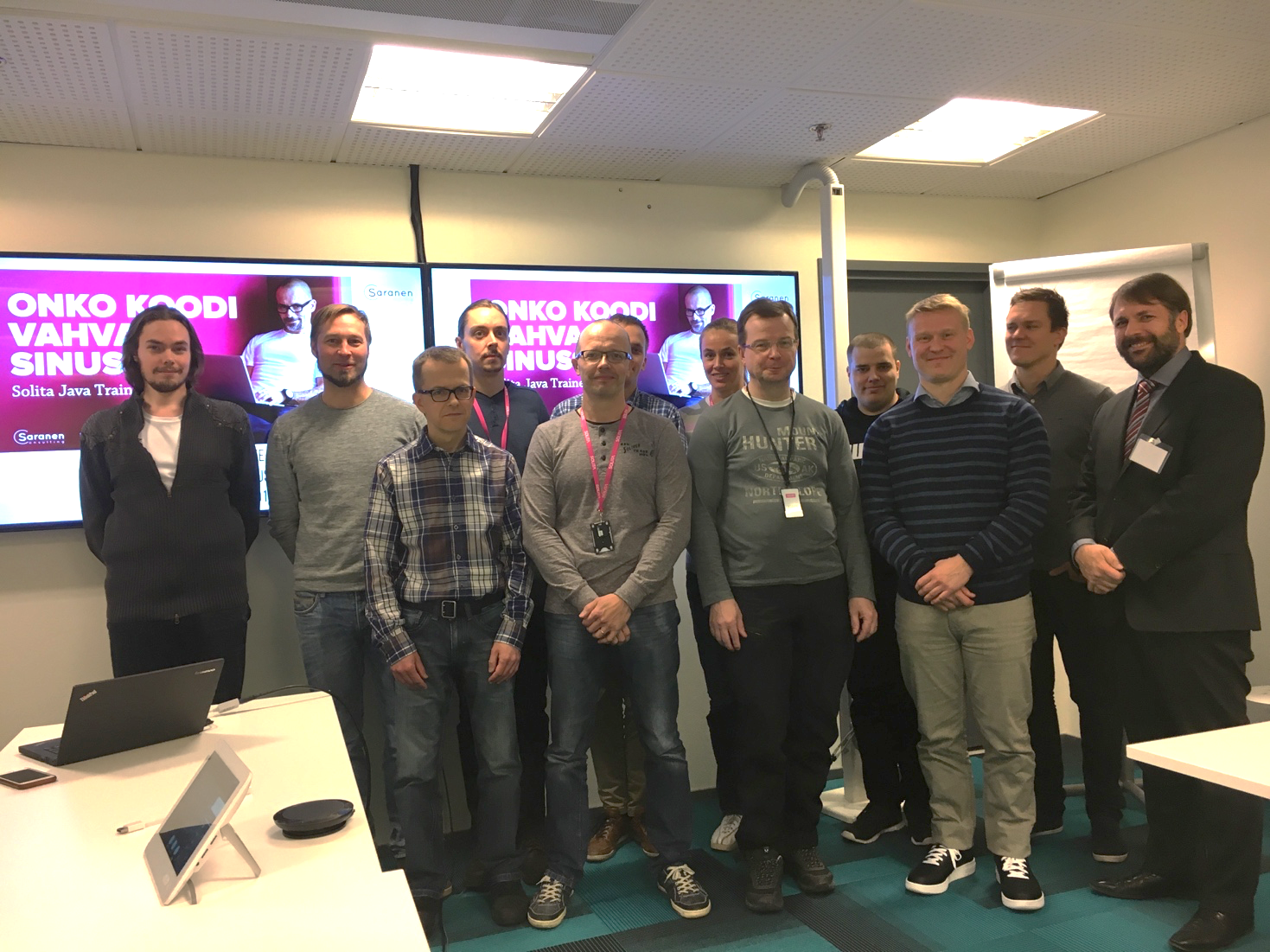 Soon it was time to go our separate ways to meet our home bases for the rest of the program. The assigned teams had been selected based on a compatibility evaluation of our backgrounds and existing skills, and the needs of the projects. So it was that I met the project team and was assigned a mentor and a seat. All set!

New employees at Solita start with a practice assignment, and though technically not an employee, I was no exception. A modified version of the regular Solita practice assignment was what I would concentrate on for the first few weeks. Should I have any issues or questions on how to continue, my mentor and other teammates would be there to assist.

The assignment was about implementing a full-stack CRUD web discussion forum application. For my part, the emphasis was on the back-end, as Java programming was what would be of most use in the project, whereas front-end technologies would not be so important at this time.

So, most of my time was spent on fleshing out the bare-bones template implementation of a Java Spring Boot application with a REST API and controller, service, and DAO layers, plus some alternative ways of implementation, particularly to replace the DAOs. I also received suggestions, as well as hints on how to go about it, on adding support for exception handling and tests. Obviously the front-end needed some attention as well, to make the forum usable. Most of the work there I carried out with AngularJS 1.5, with a few small touches of HTML and CSS.

The Java Trainee program included 15 days of technical classroom training. The trainings were front-loaded to the first half of the program, which was a good thing for getting up to speed with Java. The courses, carried out by Tieturi, consisted of Web Standards, JavaScript Development, Java Development Basics, Java Fundamentals, Java Web Development, and Java Web Services Development, in that order.

Even though I had used Java before in my career in one project, it had been long enough since then that I felt all the courses were useful to me. Even the basics were a welcome refreshment. Thinking of the practice assignment, it would have been nice to be able to attend the last couple of courses earlier, as the material covered a lot of what the assignment was about. In a perfect world, all the courses could be packed a little closer together and perhaps be conducted still a little earlier in the program. All in all, though, I think the content and the timing of the trainings were still very good.

In addition to the technical trainings, there were also a couple of “soft” training days by Eduhouse: Teamwork and Interaction Skills and How to Give and Receive Feedback. Both of these were interesting, engaging, and certainly useful.

My mentor and I also worked out a learning plan, providing me with plenty of material and links for self-studies about tools, technologies, or processes that were deemed necessary or useful within the project or Solita in general. Learning of course will not stop even after all the items in the list on my plan are ticked, as learning new things and continuous self improvement are highly valued at Solita.

The first taste of “actual work” came with Swing UI unit testing. I started by getting to know the application and familiarizing myself with the documentation and the existing code. The tools used for testing were AssertJ-Swing and Mockito, supported by PowerMock. Once I felt I had the hang of it, I started writing new tests for cases suggested by my mentor.

Sometime later I was assigned my first ticket, a basic change request to an application in the project. After finding the correct place in the code I spent some time making sure I understood how it was supposed to work, and started thinking about possible alternatives for implementing the requested change. Already the trainings were paying off as I soon realized I could use Java 8 lambdas here for a tidy solution. Small and simple as it was, it was a nice feeling to get my first bit of code approved for production.

Since then I have worked on various other change requests that have taken me around different applications in the project application family. Classroom trainings are all well and good, but learning by doing offers a wholly different perspective and is very effective.

At this writing there is less than a month left in the Solita Java Trainee recruitment program. Five months have flown by. Solitans have shown that their company values are not just empty words: caring in particular has been clearly demonstrated during the program. I never felt I was alone and up a creek without a paddle, but always received the help and guidance that I needed.

Four months into the program I signed a contract to become a full time employee at Solita afterwards. So, my personal goal was achieved, the program for me (and for Solita as well, I hope) was a success, and the story continues.