Hacker and startup culture in Slush - prejudice and synergy

I’m probably not the only one who, as a hacker, finds the business oriented culture of the startup ecosystem somewhat questionable. It’s not as if everybody involved in business were corrupted, airheaded or evil. It is just that it’s really hard to stay true and keep a level attitude when it’s about money. When you have to think about the productisation and monetisation of your great idea, both the idea and its original values are easily lost. Simply because there’s often no time to keep up both.

Slush is trying to strike a balance between these two conflicting ends: making something valuable, and making it actually happen. It’s a mixture of what I call “geek culture” and what I call “airport culture”. Airport culture is colorless, smooth and cool. It tries to please people by making them comfortable. Geek culture is surprising, rough and hot. It tries to engage people by challenging them. It’s a difference between being accepted by the system, and building the system yourself.

Not everybody will see the difference between hacker and startup culture like this. IT startups have been proving for a couple of decades that it is actually possible to build world-changing services by just letting really really smart people do whatever they want. From the corporate executive point of view, startups are probably more or less synonymous with hackers - if they ever heard about hackers. But when you look deeper, there is a clear distinction between people motivated by success and those motivated by pride in their own handiwork.

In the various IT projects I’ve been a part of, the work that it takes to build a successful service breaks down thus (the numbers are really just a gut feeling, to be taken with a grain of salt). 5% of the work is on getting an idea that would be useful to people - the so-called “innovation”. 15% of the work is on building a working prototype. 30% of the work goes into actually making the service work reliably and securely, so that it won’t frustrate or compromise its users. 40% of the work is marketing, reaching out to people who will benefit from the service. And the last 10% is empirical improvement on the service: using the data from the service to improve its usefulness. These are all costs that come before there is much revenue, whatever the business model of the service is. 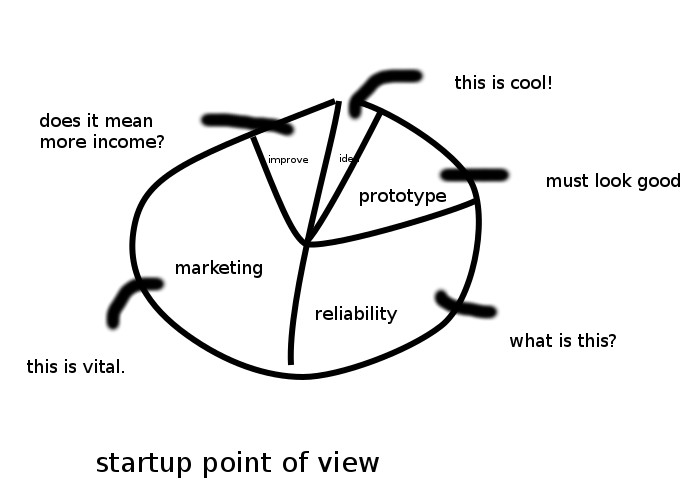 Business oriented thinking has an enormous focus on innovation, prototyping and marketing. Reliability and empirical improvement seem like investments that have little return, at least as long as most of the users are not so frustrated that they switch. Hacker culture, on the other hand, concentrates on building a sound foundation. Will you aim for maximum impact, or keeping your impact positive? If you choose the latter, you’re on the path to hackerdom. :) 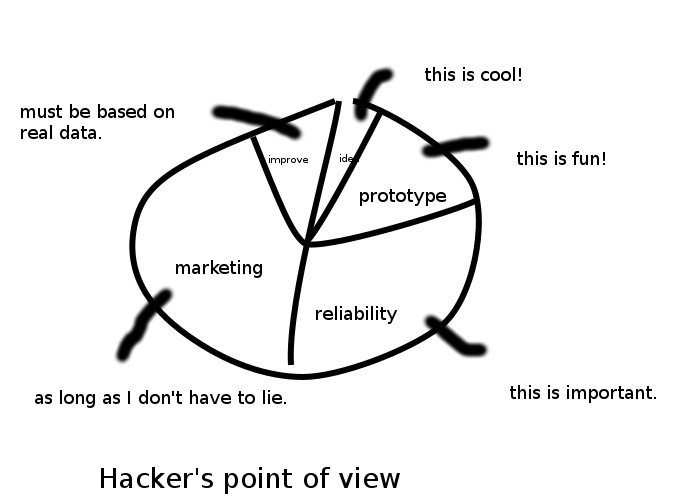 But there are areas where the two worlds meet. Prototyping is highly valued by both hacker and startup culture. Our entrance to Slush, in my company, was bought in an innovation competition where we built a working prototype of a realtime reservation map - a ridiculous idea but a very practical solution to a real problem. What’s even more ridiculous is that here, at the heart of innovation, there’s an outstanding need for this kind of map. Lines are building to coffee stops, toilets, cafeterias and free table spaces in a very congested and uneven manner.

Would we then be the good guys to introduce our map prototype here? Probably not. Before we have put real effort to its technical productisation, it will probably break down exactly when people would need it the most. It might leak sensitive information, or have vulnerabilities so that attackers can mispresent the reservation situation. As hackers, we feel the need to make it work properly, so that we can be proud of our work. As marketeers, we feel the need of raise awareness of our innovation, so that our work will have any impact. Guess which one is easier to find money for?

I dream that the world will gradually come to acknowledge both sides of this equation. Products must have both quality and popularity. The objectives of a service must include both helping people and being successful. My dream world will be achieved when it’s not profitable to mispresent the value of your product.

This might be the reason why I always loved the open source movement so. Sure there is a kind of marketing activity in the free software world - to publish your software, to make it known to people, to raise awareness. But there is no incentive to mispresent its value. Sincerity and trustworthiness, together with technical expertise, are the assets that buy you users in the open source world.

However, businesses have seen a shift towards new business models very much like those in non-profit software development. It’s not so expensive to be open and sincere, and keep the users in control of their data. You might miss some quick income, but in the long run, your product will probably be all the more successful if you never take shortcuts. And never lose the vision of actually being valuable to your users.

So we need startup culture to boost innovation, and make new solutions successful. But in the core, we still need hacker culture to make that business sound and sustainable. Stay true, fellow coders!