Facebook’s React framework has been a real game changer when it comes to building single page apps. React endorses immutability and explicit state changes and hence can be seen a sort of functional front-end framework, because functional thinking, immutability and explicit state changes go pretty much hand in hand. Coming from frameworks and libraries endorsing two-way data binding and component encapsulated state this can seem really cumbersome, because one has to change whole mindset in how applications should be constructed. For instance, in Angular you hide state inside components and react accordingly (pun intended) when a state change is detected. In React you always perform explicit state changes and say: this is the new state, deal with it.

At first, this can feel a bit cumbersome. On top of that React does not actually give you much support or ideas in how your components should communicate with each other. React just basically says: keep state and delegate it as immutable props to child components and while at it try to keep state in as few components as you can. What if I need to (and I always do) communicate from child component to parent!? How do I do it in scenario like this:

I was building single page app in ClojureScript with great great great Reagent framework, which is a minimalistic ClojureScript wrapper for React. I needed some guidance in how I should construct my application when it got bigger and re-frame architecture seemed intresting. Re-frame is an opinionated architecture in building SP-apps and it’s pretty darn simple yet clean and elegant to my taste. I realised, that Re-frame is an improved and more structured version of what I initially was doing when I was learning React.

Re-frame is based on a simple idea of strictly one directional data flow. Re-frame introduces concept of app-database which contains all the state. In Re-frame all the state really means all the state. State is kept strictly in single place and it is not encapsulated inside components. On top of that, components modify the state by events and do not interfere with it directly. 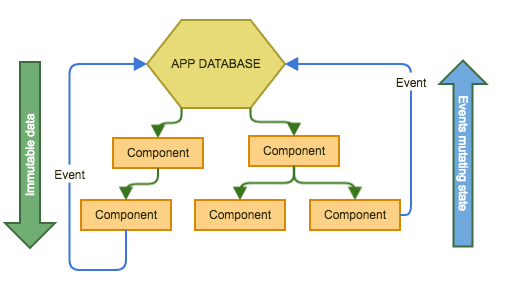 This can feel really awkward, because everyone have told you before to isolate the state in well defined components. It can be even considered as a bad practice to have this sort of global state container. Now, take the red pill and really take some time to consider what user interfaces really are. User interface is a rendered state with functions for user to give input to modify that state and render it again. Sounds exactly like re-frame to me.

Using such architecture grants us a couple of really beneficial aspects. Firstly, you have a single source of truth. Everything that is in application state is in one place and not scattered around in million components. Secondly, most of your application is totally immutable, which means you can test rendering in isolation really simply by just altering the props given to components. This is really lean way of building ui-components, which you can just hook to application state when rendering satisfies you. Thirdly, you can test your state handling in isolation as well, because you are able to separate state functionalities in a separate module.

How to do this then?

React comes out of the box with everything we need to build app in this sort of manner except one crucial part. We need some sort of event bus to trigger events from components which are then handled in stateful part of our application. Luckily, building simple eventbus is a no brainer in javascript. Here’s my take.

It could support multiple handlers for same event id and such, but let’s keep it simple. Now we can utilize our event bus as a communication means between two React components.

Note that the CooleastApp component passes the current temperature state as an immutable prob to CoolestButtons component which then uses it for rendering. When button is clicked an event is triggered to event bus which eventually modifies app database via handlers registered in CoolestApp component. The state propagates again to those lovely immutable child components. Really nice thing is that you can try out your component in complete isolation: 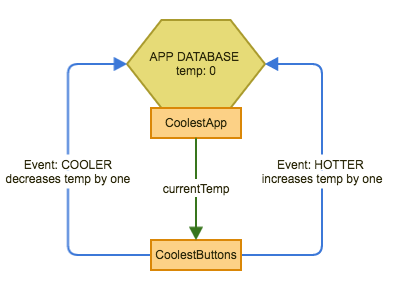 This application is overly simple, but the principle is very much the same with much larger applications.

Phone book application in React with one directional data flow

Next, we construct a phonebook application using this sort of approach. Our application supports adding new contacts, deleting existing ones and live filtering for contact list. Because we are visual beings, we plan our application by connecting a couple of boxes together. 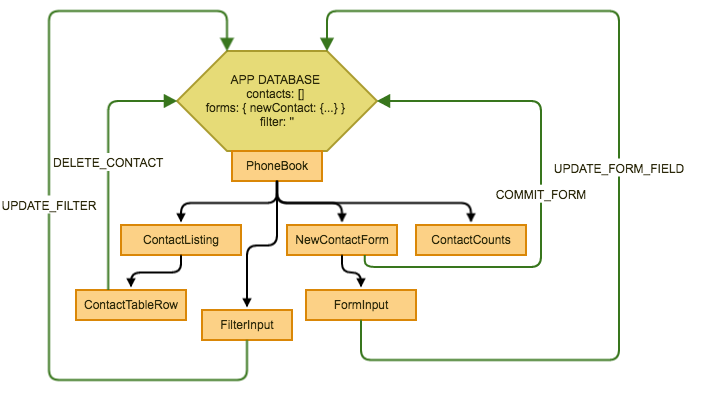 Code is available from here. At initial stage, our application looks like this. 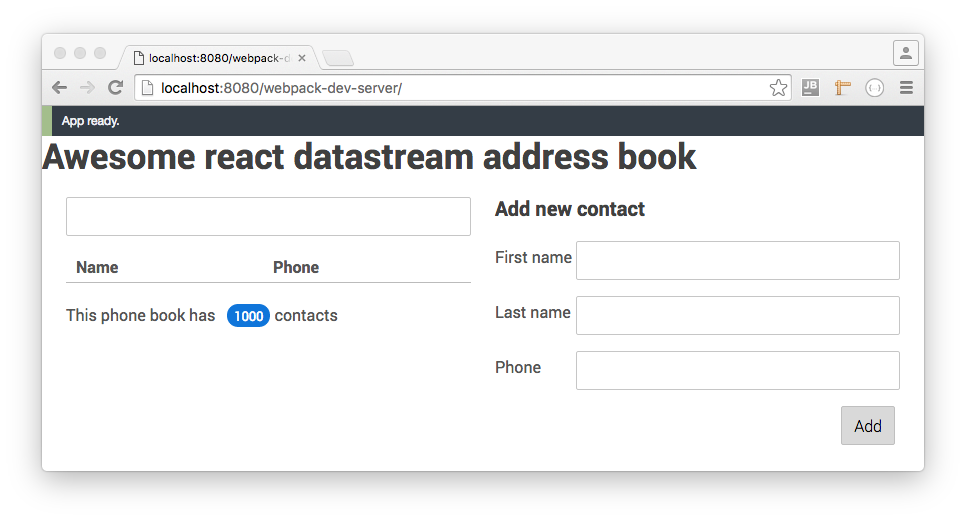 It doesn’t actually do anything but looks fancy! Most certainly it does not have 1 000 contacts!

First we create app database, the heart of our application containing all the state, and add some mock connections to it. We just getInitialState function for this. Then we pass connections in state as an immutable prop to ContactListing and vóila! 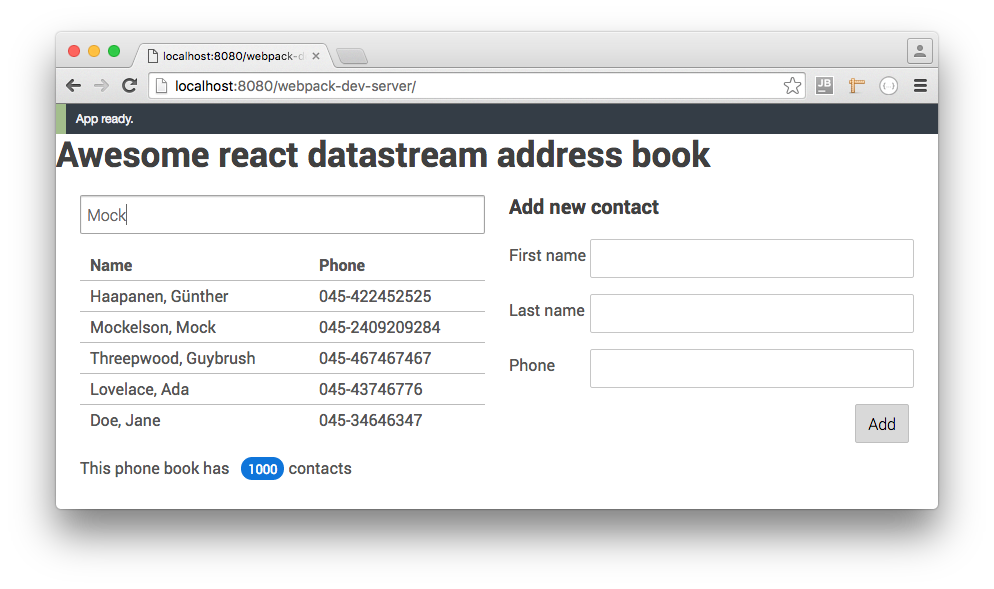 Now. Don’t panic. Here’s the real deal. When user enters something to the filtering input form, we want to trigger event UPDATE_FILTER and update our app database. We do that byt adding “nameFilter” attribute to out app database and pass that as a prop to FilterInput component. Then we trigger UPDATE_FILTER event with new value as a parameter and update state accordingly in handler. This is the data flowing almost in Zen-like manner unidirectionally. After this we simply pass contacts as a prop to listing component but do it via function which is aware of the name filter kept in the state. 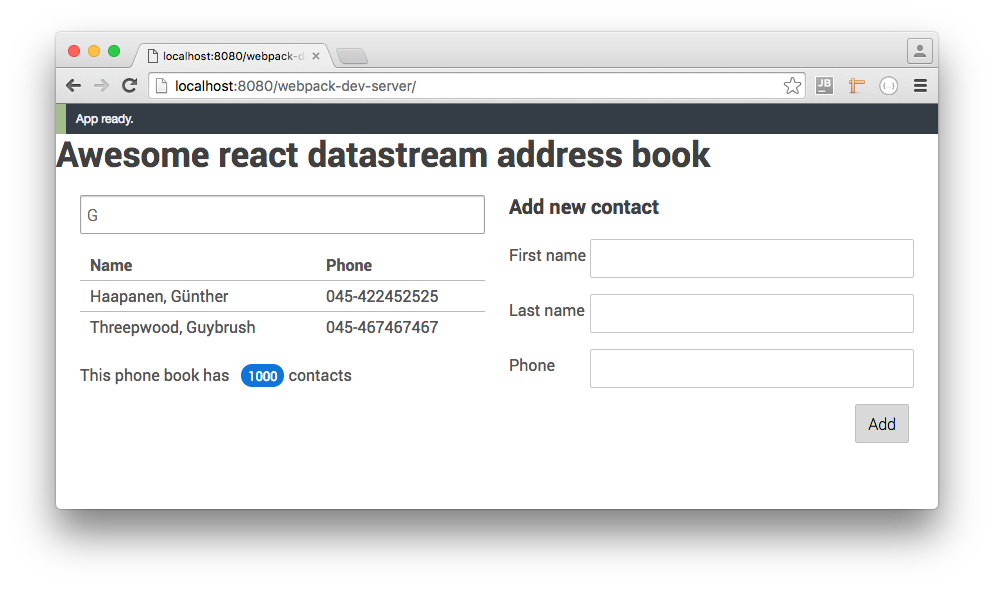 Filtering! It works! This is how it’s done.

I’m sure you can figure this one out, it’s such a trivial task. If not, checkout my commit. 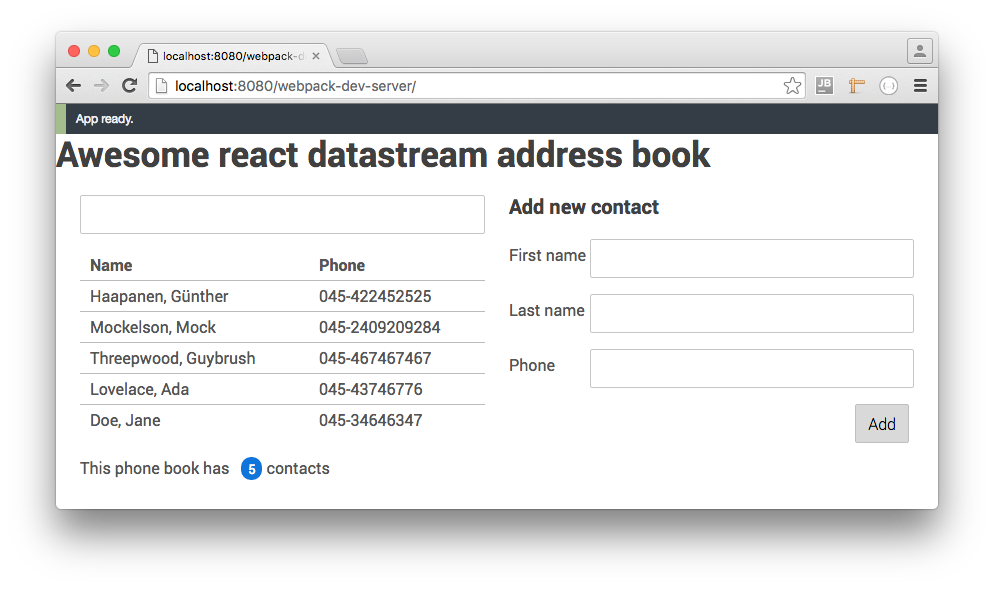 It’s important to realize that forms always have a state. When user inputs something to text field, he or she effectively changes the application state. Coming from here, it’s clear that our application database must contain state of this form!

So first thing to do, is to define this into the application state!

Then we pass that state as a prop to NewContactForm.

And from there, we pass separate fields onward to FormInput components. Now it’s a good time to test value propagation by setting something to state and expect it to render in inputs. 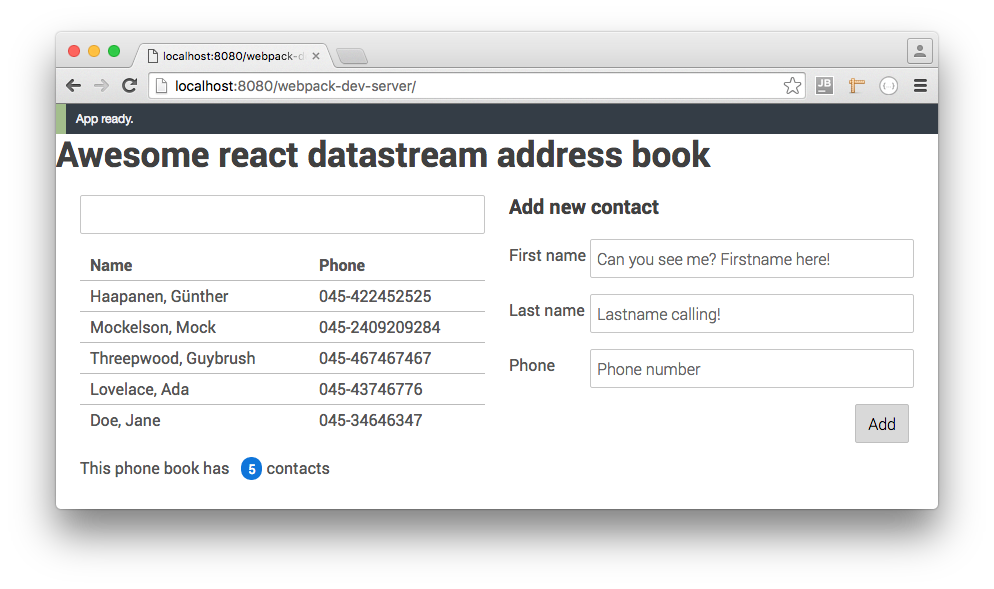 If you try to modify fields now, they won’t “echo” what you typed. This is because value is bound to a prop and it is not updated in the app database. Just hook event handler and update value in state.

Committing form should be just as easy. Just fire event from a click to add button and update app database accordingly. Do not try to send values from NewContactForm or something like that! Trust the state Luke! Just copy form values as a new contact to contact array. Whole point is that the app database is the only source of truth. Also, remember to reset the state of the form after succesful commit in order to clear inputs.

If you don’t get it, maybe my commit will clarify this. 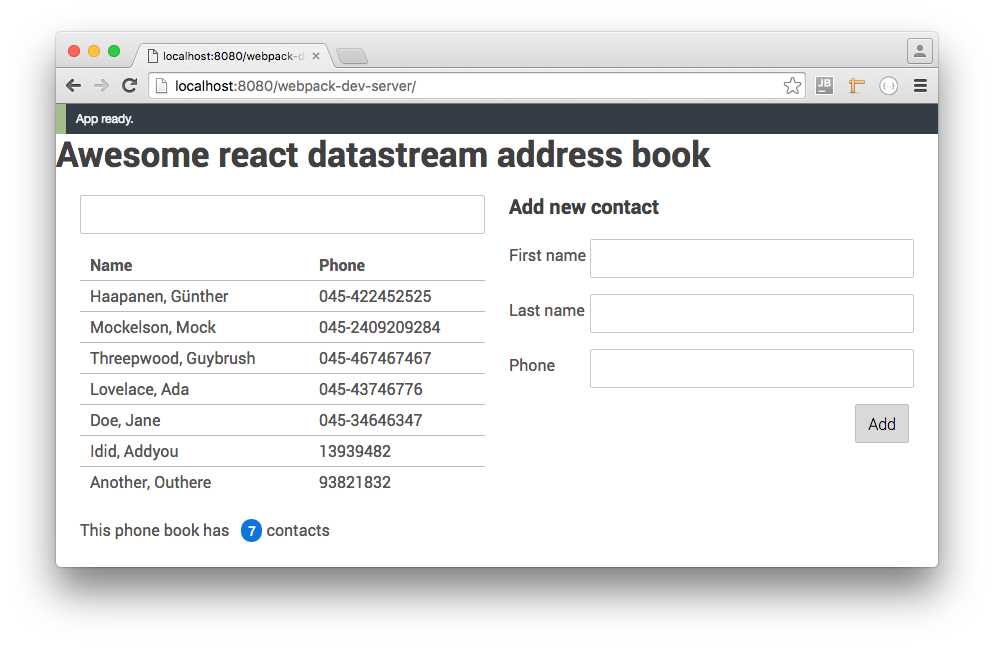 This is easy as a pie. Just create button, and fire a event from it and update the app database accordingly. I’m sure you can figure it out, but check out my commit. 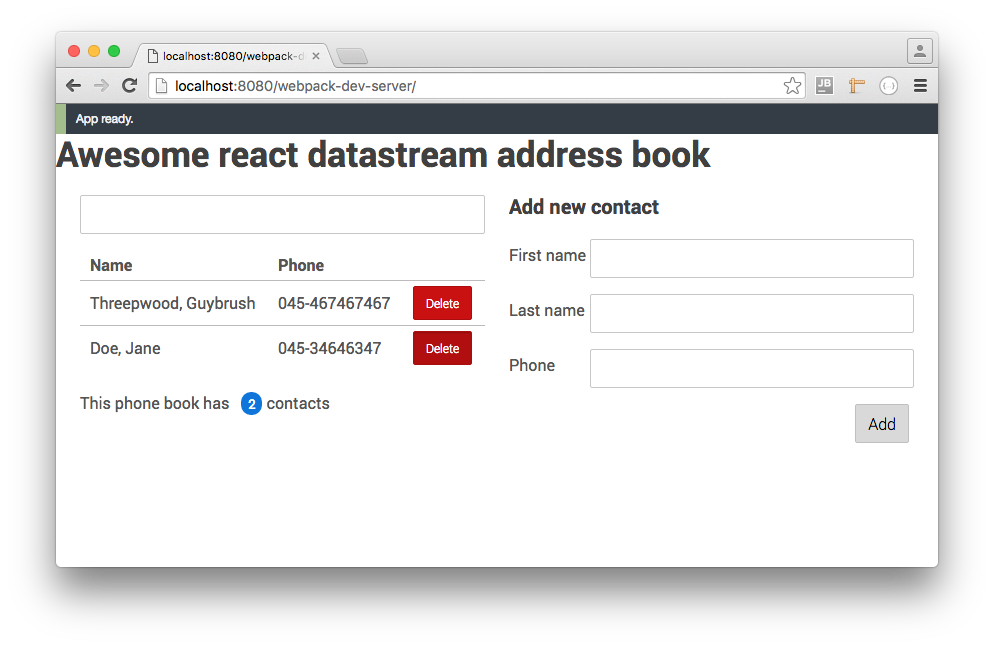 This post did not deal with issues such as validation or talking to back ends. Validation is not that different. You just pass the state to components and validation result is derived from state. You must decide whether the component itself or the main application is responsible for validating data. In our example we should activate that add button only if every field has value in it. I would prefer passing “canCommit” or similar prop to component because it allows me to test component in complete isolation. This also keeps application logic in single place - components are stupid and just act according to props. It also allows to just render it without any state and see how it behaves when props are changed.

Talking to backend is even more straigh forward! Just fire an ajax-call, set flag in your app database which propagates as a loader or dirty state etc. in your components. When component is told to be loading by prop, render a spinner or similar. When response is received, just update app database and swich flag and you are done! Data still just flows from app database to components.